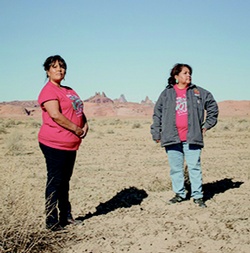 In case you’ve forgotten amid the onslaught of news over the last several months, our Four Corners neighbor to the southwest turned blue this year for the first time since 1996. This monumental achievement, no pun intended, was accomplished with the help of countless foot soldiers getting out the vote on the Navajo Nation. The charge was led by the Rural Utah Project, which drove an impressive 66,274 miles across the expansive reservation last year, registering some 5,875 voters in Arizona and Utah.

But their work – and mileage – is not going unrecognized. In its Dec. 13, 2020, “Person of the Year” issue – which named Joe Biden and Kamala Harris – TIME gave a shout-out to the diverse coalition of supporters in key states like Wisconsin, Michigan and Arizona who helped deliver Biden 81 million votes and the White House. Among the seven groups highlighted is the Rural Utah Project.

“The change really happened when the people were able to see what (the Trump) administration was doing to them during a worldwide pandemic – that it was basically playing with people’s lives,” Project Field Director Tara Benally, 47 (pictured left), told the magazine. Benally led a group of nine organizers who canvassed the 27,000-square-mile reservation, which has been hit especially by COVID-19.

In an email statement, the organization said when TIME first called them, they were in disbelief. “We were over the moon to be included in such a historic issue,” the statement read. “We were proud to be represented amongst a nation of organizers who overcame impossible challenges, and hope that we can continue to organize for years to come.”

And now that they’ve put in the miles, the Rural Utah Project is calling on the Biden team to keep up its end of the deal. “It was indigenous nations that put Biden in office,” Benally told TIME. “There should be some return on his part because we will hold him accountable to that. No more broken promises, no more falling short of what the people need.”

For more info on The Rural Utah Project, go to: www.ruralutahproject.org