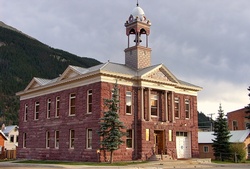 A quick update on our friends in Silverton and the most recent spat whether to say the Pledge of Allegiance at town trustee meetings.
Last week, Jonathan Thompson wrote on the town’s latest conflict after Mayor Shane Fuhrman abruptly nixed reciting the Pledge at meetings, inciting an uproar that caught the attention of Rep. Lauren Boebert and Fox News. The fallout even forced Town Hall to close after threats and harassment raised concern for town staff.
Well, after another long meeting June 28, which included debating whether to instead sing the Silverton town song (we haven’t found a copy), trustees came together and voted unanimously to reinstate the Pledge, hoping to quell tensions. Fuhrman, too, offered his mea culpa.
“I made a huge mistake by not appreciating how big of an issue this is for many,” Fuhrman said. “And just because I had the authority to make the decision does not mean I should have made the decision.”