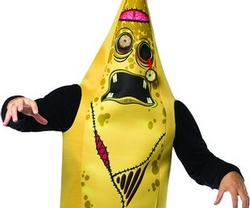 If you thought 2020 was bad, brace yourself for this one – almost 500 years ago, French astrologer Nostradamus predicted there would be a zombie apocalypse in 2021.

Yikes. It may be time to switch out your N-95 mask for a spiked bat.

Now, we still have a few months to see what happens, but, one wonders, is this a sign the people of Durango will take to the streets on Halloween night to bring back the undead Zombie March?

“We plan for the Zombie March every year, regardless,” Durango Police Cmdr. Ray Shupe said.

Durango’s Zombie March, where costumed late-night revelers take over downtown’s Main Avenue at midnight on Halloween started around 2007, as far as we can tell. How it started? We don’t know. Quite simply, maybe people just oozed out of the bars on Main Ave. one year and started aimlessly walking up and down the street.

The Zombie March, however, became hugely popular, drawing hundreds of people to the unsanctioned, unofficial event. And for years, it’s been a tightrope act to balance the will of a mass crowd taking over a major city street and the need to keep some semblance of order.

In 2011, though, the celebration got out of hand, with people trying to overturn cars (unsuccessfully), throwing glass bottles at police and sitting down in the middle of Main Ave. refusing to move. Marchers took on the “Whose Streets? Our Streets!” chant, which originates from the Civil Rights Movement. How it applies to drunk people dressed as bananas on Halloween, we’re not sure.

Police, in turn, responded with a somewhat heavy-handed approach, using pepper spray and beanbags to disperse the crowd, and even calling in a SWAT team. Durango made national headlines that year after 22 people were arrested.

“I don’t know why those years got out of hand,” Shupe said. “There were a lot of things going on nationally, which maybe played a role.”

Regardless, Durango police realized there had to be a better way, so officers met with members of the community, including Fort Lewis College, to foster a better sense of cooperation for the march. By 2013, tensions were tempered, and now, police usually let people take over Main Ave. for about an hour or so before asking everyone to get on the sidewalks. And this approach has worked. Aside from a couple drunken fools getting into trouble, there have been no major incidents or mass arrests like in years’ past.

Last year, the Zombie March was nonexistent because of COVID-19 (although the streets that year were actually more reminiscent of a zombie apocalypse, one might say). With Halloween this year falling on a Sunday, there’s no telling if the zombies will emerge Saturday or Sunday night. Or if at all.

And if you do see a zombie, did you know the CDC has a (tongue-in-cheek) “Zombie Preparedness” page, listing all the essential to survive, like water, food, tools and first aid supplies?

Well it’s true. And no, hoarding mass amounts of toilet paper is not part of the plan.

What it takes to become a cliff diver at Casa Bonita

What the heck is Fanny Pack Friday?

The Hive’s Buzz Bus has broken down and needs some help.

Parker’s Animal Rescue is hoping to raise $450,000 to find a permanent home.