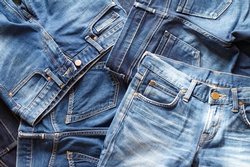 Yet another victim of the pandemic: bluejeans. Seems with the advent of work-from-home leisurewear, U.S. denim sales have taken it in, er, the seat.

Over the last three months, denim sales have fallen by double digits compared with the same period last year, according to the Washington Post. Seems folks have had a fashion epiphany over the last few months, opting for the “business on top, comfort on the bottom” model. They would just as soon wriggle into soft jammie bottoms with stretchy waistbands than high-waisted skinny jeans, according to the Post.

“I haven’t worn a single pair of jeans since the pandemic started,” remote-working Manhattanite Alexa Muñoz told the paper. “They’re looking at me sadly from the closet, but it’s like ... Why was I punishing myself?”

The latest drop only adds insult to injury for the denim industry, which has seen a five-year downward slide. Last year, Americans spent about $17 billion on jeans, or 5 percent less than the nearly $18 billion spent in 2014, according to the Post. Sales of “super premium” jeans – brands like 7 for All Mankind, True Religion, Joe’s and Hudson, which can cost upward of $200 a pair – slid more than 40 percent during that period.

True Religion, Lucky and G-Star RAW have all declared bankruptcy since April, while the parent company of Joe’s and Hudson filed for Chapter 11 protection in May. Levi’s this month posted a 62 percent drop in second-quarter revenue and announced plans to cut 15 percent of its corporate workforce, according to the Post.

Meanwhile, “athleisurewear” retailers like Lululemon and Gap, which owns Athleta, are reporting an uptick in sales of joggers, leggings and sweatpants.

Overall, apparel sales have dropped nearly 40 percent this year, according to Commerce Department data, mirroring a consumer pull-back in just about every category of spending. Plus, with many stores and fitting rooms still closed, it’s easier to buy a pair of sweatpants online than it is to gauge the size, fit and feel of a pair of jeans.

“Casual is really what’s winning right now,” Maria Rugolo, an analyst for NPD Group, told the Post. “Activewear is becoming more acceptable and if customers are looking to extend their wardrobe, they’re more likely to buy something with multiple uses, that they can wear for work, leisure and working out.”

“Jeans are cardiovascular prisons,” Sherman Oaks, Calif., spa/salon manager Rocío Rodríguez, 28, told the Post. “As much as I like the look, I don’t find myself waking up every day thinking, ‘Wow, I can’t wait to put on my jeans.’”