Call off the search 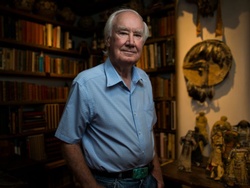 The hunt is “fenn”ally over. More than 10 years after eccentric Santa Fe millionaire Forrest Fenn published his cryptic poem leading untold thousands on a wild goose chase across the Rocky Mountains, his treasure has been found.

Fenn, 89, made the announcement on his website Sun., June 7. He did not disclose the treasure’s location, nor did he name the man who found the treasure, other than to say he was from somewhere “back East.” He confirmed his discovery by sending Fenn a photo of the riches.

"It was under a canopy of stars in the lush, forested vegetation of the Rocky Mountains and had not moved from the spot where I hid it more than 10 years ago," the 89-year-old Fenn wrote. "I do not know the person who found it, but the poem in my book led him to the precise spot."

Fenn is referring to his 2010 autobiography The Thrill of the Chase, which contained a 24-line poem that contained clues to the treasure’s location. The treasure, said to contain rubies, gold, emeralds and diamonds and estimated to be worth over $1 million, was a way for Fenn to give people hope and inspire them to explore nature during the Great Recession, he said.

Fenn estimated that as many as 350,000 people from all over the world went hunting for the treasure, according to the Santa Fe New Mexican. Some quit their jobs to fully dedicate their lives to the hunt, with five unlucky souls losing their lives in the hunt. Many others have gotten lost in the wild, prompting dangerous rescues.

"I congratulate the thousands of people who participated in the search and hope they will continue to be drawn by the promise of other discoveries," Fenn said on his website.

And despite prodding from the curious and crest-fallen, Fenn told the New Mexican Monday he was not "going to talk about it anymore."

At least one hunter interviewed by the New Mexican said he could see the logic in this. "I am personally wondering if Forrest will actually reveal the location," Ken King, of Longmont, said. "This place was a special place for him, and maybe he won't want hundreds or thousands of searchers descending to get a look at the resting place of this treasure chest that has eluded us for so long."

Over the years, the search for Fenn’s treasure has spawned an annual gathering of campers at Santa Fe’s Hyde Memorial State Park known as Fennboree, as well as several documentaries and hundreds of articles. The New Mexico Department of Tourism even produced a video about the search for the state website.