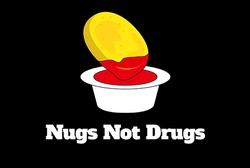 Durango’s Police blotter can be a source of endless entertainment.

People yelling at lamp posts, late night marauders stealing asparagus from home gardens, reports of deadly spirits attacking hotel managers, drunken people atop trees yelling at people down below, a gang of raccoons blocking someone from getting into an old folks home, an unauthorized guy in the middle of Camino del Rio directing traffic. It never disappoints.

Oh, and let us not forget the torrent of late-night crime reported at Denny’s – from the man who refused to come out of the bathroom to the two people arrested this September after trying to “destroy” the restaurant. One of the pitfalls of being (the only) all-night diner.

So, we were a bit taken aback the other day by a blotter item that was truly confounding. According to the report, at 8:45 p.m. on Oct. 30, in the 5200 block of Main Ave, a “DRIVER HAD A CHICKEN NUGGET ACCIDENT CAUSING”

Now, Durango Police’s blotter data is intentionally terse, meant to give a quick rundown on the nature of the call should any reporters want to follow up on a particular incident.

Cmdr. Jacob Dunlop, being a good sport for this story, went to check police records for more information on nugget-gate. But what he found, or didn’t find, was disturbing. “I don’t have much info on it. No citation, no report.” Dunlop then said, if we wanted, he could follow up with the officer who pulled over the vehicle. And of course we said yes, because what’s the point of this publication if we don’t indulge ourselves every now and then?

With the vehicle swerving and weaving all over the road, the officer on duty put on the emergency lights and pulled the car over, only to find “the lady had spilled chicken nuggets in her lap and that was the reason for the driving behavior.” She was then given a warning to, ya know, not do that, and released without a ticket.

So, all’s well that ends well? No! It turns out after an extensive Google search that chicken nuggets are a scourge on this nation.

• A man in Florida (of course) in 2020 filed a lawsuit against McDonald’s after he broke his tooth on a bone while biting into a Chicken McNugget.

• In 2019, a truck in Alabama crashed and spilled chicken nuggets all over the highway. Doesn’t end there: other drivers then stopped to pick up the nuggets, causing a traffic hazard. The Alabama Sheriff had to warn people eating chicken nuggets off the highway isn’t safe. Oh god.

• And finally, a driver who was dipping a chicken nugget into some sauce while driving hit a parked car, causing his own vehicle to roll. The driver, and chicken nuggets, reportedly all survived.

So here we are, wondering what kind of world we live in, while at the same time, kind of a getting a craving for chicken nuggets.