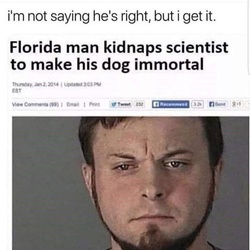 In recent years, an infamous new character has taken his place in the Internet spotlight: the reckless, brainless “Florida Man,” a culprit for many wild misdeeds. Men (and women!) in Florida always seem to be making the news for actions that defy all common sense. Some examples: stabbing someone with a swordfish, brawling with the Easter Bunny, throwing an alligator through a drive-thru window, and much, much more.

So what’s the deal with this phenomenon? In Blue Oyster Cult’s song about the Florida Man, the classic rock band attributed the caricature’s errant nature to an ancient curse placed on conquistadors. Some cite Florida’s open records as a reason for increased news coverage, causing us to focus on Florida men rather than, say, Georgia or Alabama men. Others say the craziness is a product of Florida’s unique culture and environment.

Whatever the reason, Florida men and women exist and refuse to be ignored – and we, as Americans, must live with them.

We all know about the ongoing cultural war in the Sunshine State. Gender identity has become a forbidden topic, and books are being pulled from school libraries like weeds from a garden. And through it all, Florida Man is not staying silent. Consider the actual Florida man named Chaz Stevens, who recently made headlines by insisting the Bible should also be banned from schools. He challenged the laws around book banning with malicious compliance, highlighting their innate hypocrisy. Young Floridians have also fought back against so-called Don’t Say Gay laws, marching out of schools and waving pride flags in protest despite the threat of suspension or expulsion.

One has to wonder, is that Floridian courage and stubbornness just what we need right now? He might be the world’s worst superhero, but at this moment, Florida Man may actually save the day by battling threats to equal education and free speech.