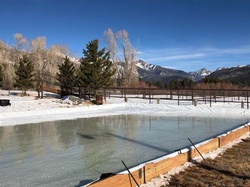 Not a skier and snowboarder, but still looking for some outside fun and exercise during the winter? Well, pretty soon you’ll be able to sharpen your figure skating or hockey skills (or practice just plain balance on ice) at a new outdoor ice rink taking shape at Vallecito.
Earlier this month, the Bureau of Reclamation and the Pine River Irrigation District green lighted a citizen led effort to build a community ice rink, a project of the Vallecito Conservation and Sporting Association.
The rink, still under construction (and not actually on the lake), is located just off the parking lot at the Vallecito Community Center, on the north end of the lake. In recent days, volunteers have laid a foundation, erected wooden boards and placed a liner sheet down for the ice.
Even Pine River Fire Protection District got in on the action, dumping water in the pit with the hopes Mother Nature will take it from there. On Tuesday, the district dumped three tanker loads of water, and planned to drop down an additional two to three loads Wednesday.
As of Tuesday, the ice was reportedly 2 inches thick, but the coming forecast of snow could put a damper on the plans. From Thursday to next Tuesday, the mountains of Colorado are expected to see a dumping of up to 30 inches of snow, according to OpenSnow.com.
According to the Facebook group “Vallecito Community Ice Rink,” the rink will open once organizers secure insurance – and maybe a few good shovelers. Stay tuned to their Facebook page for updates on the grand opening.
And then, maybe we can get a team together to sub-in for Olympic hockey now that the NHL pulled out.

Leo Lloyd, a search and rescue pioneer, dies at age 60

Have no fear, Tube Dude is here for your floating needs

An initiative to legalize hallucinogenic mushrooms in the state of Colorado will be on this November’s ballot after receiving enough signatures from residents.