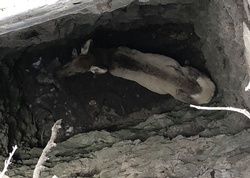 Although most of us have been feeling a little trapped during this extended stint of home confinement, it’s likely nothing like what a stray elk near Creede recently experienced.

Last Sat., April 18, two women hiking in the upper Rio Grande Valley came across a cow elk trapped at the bottom of a 30-foot mine shaft.

The elk was discovered by longtime Creede resident Chere Waters, who knew about the open shaft and decided to show it to her friend. She told wildlife officials that she “belly crawled” on the ground and had her friend hold onto her ankles so she could peer over the edge.

“I looked in and see this animal in there. I was so surprised, I couldn’t believe it,” Waters said.

“When I got the call, I was told that a deer was stuck in a hole,” Woodward said. “When I got there, I could see it was an elk, and it was probably 30 feet down.”

He could also see where the animal’s tracks disappeared at the edge of the hole.

According to Waters, it’s no surprise the animal wandered into danger. The hole abruptly opens up, with little or no warning, on the edge of the forest. “It’s the scariest thing, it’s at the edge of some trees so it’s hard to see,” she said.

Fortunately, the 250-pound animal was agile enough to land unharmed. The wildlife officers were able to dart and sedate her, and a member of Mineral County Search and Rescue shimmied down the shaft and placed straps around the animal, in what was surely one of his more interesting rescues. A winch from a nearby truck then hauled the large ungulate out.

Back on the surface, the elk rested for a few minutes while officials examined its condition. When found to be in good health – other than being a little scrawny from what appeared to be two or three days in the well – the elk was given a drug to reverse the tranquilizer.

Fortunately, all’s “well” that ends well. Eventually, the cow stood up, albeit a bit groggy from the ordeal, surveyed her rescuers and scampered off. “When she stood up, she moved a few yards, turned and looked at us for a few seconds and then turned and trotted away,” Woodward said.

As for Waters, she can’t explain what it was that drew her to the shaft – and to peer inside. Maybe it was some sort of cosmic elk call – but whatever it was, she was thankful for it.

“I don’t know what it was,” Waters said. “I was just called to go to that place.”