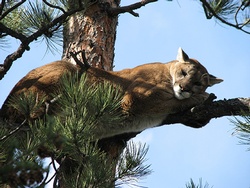 Hiking and biking season is almost upon us in Southwest Colorado, which brings with it a host of concerns and considerations, not the least of which is co-existing with wildlife.

Of course, the apex predator at the top of most of our worried minds when jaunting about the backcountry alone is the mountain lion. Perhaps no other animals are as simultaneously feared and revered as the mysterious, large cats.

And now, thanks to Colorado Parks and Wildlife, we can get up close to these four-legged wonders of the wild without, well, actually getting up close. Last month, CPW introduced a four-part educational video series on mountain lions. The series, available on YouTube, covers such topics as mountain lion biology and historical perspective; mountain lion habitat and human expansion; hunting; and, the question on all of our minds, what to do when you encounter a mountain lion.

CPW Director Dan Prenzlow said this video series was produced to tell the history of the mountain lion and living with lions in our growing state.

“Mountain lions are a fascinating yet elusive animal, but when they do pop on the radar they make for big headlines,” Prenzlow said. “Sightings of mountain lions are increasing, and we’ve had a couple high-profile attacks in the last two years. Thanks to sound management practices implemented over the years, mountain lions are doing quite well in Colorado. The challenge going forward will be balancing decreasing habitats and our exploding human populations, since we share the same spaces.”

Mat Alldredge, a wildlife researcher for CPW and leading expert on mountain lions, sparked the idea for the video series.

“We’re trying to present our mountain lion research in an informative manner that is accessible and interesting to the public and not in a dry, boring research paper,” he said.

For check out the video series, go to: tinyurl.com/ks3hdmaw