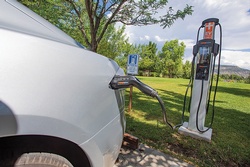 The good news: electric and hybrid vehicles sales are speeding up in Colorado. The bad news: manufacturers of the SUVs and trucks Coloradoans love have been slow to hop on the EV bandwagon.

Coloradans registered 3,872 electric and plug-in hybrid vehicles in the first quarter of 2021, up 66 percent from the same period in 2020, according to a story in the Colorado Sun. Those EVs made up 6 percent, or 3,842 of the 64,039 first-quarter registrations in Colorado in 2021, up from 3.8 percent in 2020. However, this is still a small percentage of the state’s overall vehicle sales and a far cry from the state’s “Greenhouse Gas Road Map” goal of putting 940,000 electric vehicles on Colorado roads by 2030.

Part of the problem? Colorado loves its 4WD trucks and SUVS, particularly the ubiquitous Subaru. And if you think the state has more than its fair share, it’s not your imagination – more than 10 percent of the vehicles bought in Colorado in the first quarter this year were Subarus, compared with less than 5 percent nationally. Overall, more than 97.1 percent of vehicles bought this year in Colorado were 4WD SUVs or light trucks, compared to about 75 percent nationally. Just 13 years ago, these vehicles made up 58 percent of all sales in Colorado.

However, experts believe EVs likely won’t gain traction until there are more electric SUVs on the market. Although Colorado buyers would likely snatch up an EV Subaru, the company has announced that its first fully electric SUV – developed with part-owner Toyota – won’t go on sale until late 2022 at the earliest.

Ditto goes for other Colorado 4WD faves. An electric Ford F-150 pickup won’t be hitting U.S. car lots until late 2022 and will come at a high price, according to the Sun. The Dodge RAM is not expected to go electric until 2023, and Toyota has been slow to announce new EV models as well.

In addition to a lack of electric SUVs, Colorado still needs to come up to speed on its charging infrastructure. A report by the International Council on Clean Transportation found Colorado needs to grow from its roughly 2,100 stations to 24,100 by 2030.

Currently, Durango has about nine EV charging stations, and there are still generous dealer discounts and tax credits for EVs, depending on the manufacturers. 4CORE is holding an EV test drive Sat., May 15, from 1-5 p.m. at the County Fairgrounds. EVs featured include the 2021 Chevy Bolt, Kia Niro and Mustang Mach-E, and buyers will be able to take advantage of a special 4CORE group buy deal through June 15. For more info, go to www.fourcore.org.