In a mountain park far, far away... 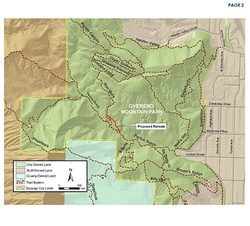 Lovers of Star Wars – the trail, not the movie – listen up.

The city of Durango is planning on doing some work on the popular mountain bike trail in Overend Mountain Park, and the time to weigh in is at a public comment hearing next Mon., July 26.

According to the city, the Star Wars trail has seen significantly more use recently, which has led to safety and resource degradation concerns. As a result, the plan is to address “erosion issues and create more sustainable trail alignments.”

The re-route of Star Wars will happen at the end of the notorious downhill, where it intersects with Perin’s Gulch (formerly known as Slime Gulch), where the trail has become eroded, rutted and, for some, a bit sketchy.

Amy Schwarzbach, the city’s natural resource manager, said the city has been working with Durango Trails to finalize the details of the re-route, which will be shared at a public meeting from 5:15-6:15 p.m. on July 26. Calls to Durango Trails were not returned.

May the power of public comment be with you.