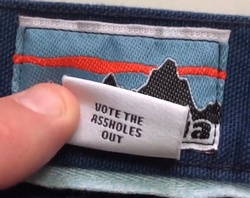 Patagonia, the outspoken climate change warrior, is at it again – albeit a bit more subtly this time. The interweb is abuzz this week with photos of a Patagonia label whose underside discreetly reminds the wearer to, “Vote the assholes out.”

In these days of deepfake Photoshopping, Adventure Journal went straight to the source to find out if the label was legit. And, more importantly, who the “assholes” were.

“We were having some fun in these dark days,” the brand’s spokesperson told AJ.

When asked the burning question of if “assholes” refers to a certain political party beginning with an “R,” the brand insisted it was not partisan. “We have used this to refer to politicians from any party who deny climate change is real, or don’t believe we should do anything about climate change, not because they aren’t aware of it, but because their pockets are lined with money from oil and gas interests,” the brand replied.

Apparently the tags were added without the big little man’s input, but once he found out, he immediately ordered a pair in size 32.

The Fair Trade shorts come from farms that work to build healthy soil that traps carbon and slows climate change. All that activism retails for $69 and is available in stone blue and, of course, earthworm brown.