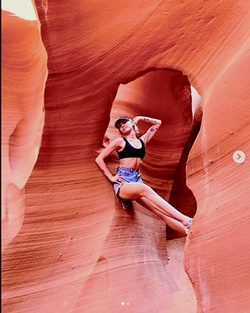 If you were traipsing through the desert last week, perhaps you were lucky enough (or unlucky, depending on your taste) to catch a glimpse of none other than Miley Cyrus. The former Disney “It” girl came in like a wrecking ball to the Southwest, according to her Instagram posts. As best we could discern, (though not fond of clothes, Miley is at least a responsible geo-tagger, or more likely trying to dodge the paparazzi) daily highlights included: hiking in Zion National Park; exploring (and draping herself all over) Antelope Canyon; sea kayaking on Lake Powell; and cavorting by the pool.

While twerking her way across the desert, Miley was joined by her mom and sister. They made Utah’s exclusive Amangiri Resort, about 10 miles northwest of Page as the crow flies, home base.

“Love it there,” commented none other than Justin Bieber, one of Miley’s nearly 1 billion followers, of the secluded luxury resort where rooms go for about $3,000. Other amenities include private fire pits, reflective pool, yoga pavilion and gourmet meals that resemble delicate edible works of art. (Which may explain why some followers urged the scantily clad star to eat a burrito.) Guess you could say it was the best of both worlds.