After he was unceremoniously let go from his director role at MountainFilm in 2017, Telluride resident David Holbrooke got to thinking. The town needed another festival, but not one during the busy summer or winter months, and not one that had been done before.

He wanted something original, and thus, the Original Thinkers festival was born. With its inaugural event in 2018, Original Thinkers returns to the box canyon next weekend, Oct. 3-6. Original Thinkers is billed as an ideas festival that uses speakers, art, film and performance to delve into the big issues of our time. “We focus on the crucial intersection between ideas and story and look at how to process the chaos of this modern age,” organizers write.

If this all sounds vaguely similar to the Aspen Ideas festival, it is. Holbrooke credits it as the “granddaddy” of brainstorming gatherings. And while Original Thinkers may not pull in the Mark Zuckerbergs of the world (yet), it does have some noteworthy speakers of its own. The gathering entails 10 “shows” on 10 distinct topics covering everything from personal evolution and climate change to sex-trafficking and the fight for LGBTQ equality. Speakers include:

• Rich Roll – a recovering alcoholic who turned his life around to become an ultra-endurance athlete and one of Men’s Journal’s “Top 25 Fittest Men.” Roll is known for his popular memoir, cookbook and eponymous podcast;

• Ruthie Lindsey – hit by an ambulance at 17, Lindsey had a 1 percent chance of walking again. She defied the odds only to inexplicably become bedridden by chronic pain several years later. Now in her 30s, Lindsey has recovered and offers a message of hope for others facing “brokenness;”

• Richard McKinney – After 25 years as a Marine in the Middle East, McKinney returned home so enraged that he planned to blow up a mosque in Indiana. However, when he went there, he was so embraced by its members that it changed his life, and theirs, forever. His short movie, “Secret Life of Muslims” will trace how he became a Muslim and leader of that mosque.

• Sarfraz Manzoor – The real life subject of the film “Blinded by the Light,” Manzoor will talk about the impact Bruce Springsteen had on his young life and help answer the all-encompassing question, “what does music really do to us?”

• Mr. Wash – Wrongly imprisoned for two decades on drug charges, Wash was pardoned in 2016. While in prison, he turned to art and painting to depict the real-life stories around him. Now back home in Compton, Calif., Wash uses art to make a case for creativity as an optimistic force in America's broken criminal justice system. A short documentary details his journey.

The final show of the festival will screen a documentary on the evolution of Aurora’s St. Matthew’s Lutheran Church into a multicultural gathering place for the city’s growing refugees and immigrant population. Brandon Victor Dixon, of Broadway’s “Hamilton” and founder of the voter-engaging WeAre, and St. Matthew’s pastor Marcel Narucki will share the stage afterward.

All main events take place at the Mountain Village Conference Center. All-access passes cost $350 for the weekend. For more info, go to www.originalthinkers.com 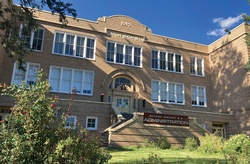