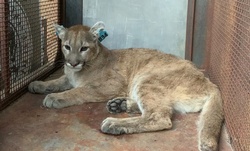 A young mountain lion just searching for its place in the world, wrongly choosing downtown Durango, was recently relocated to greener pastures to live out its life.

Adrian Archuleta, area wildlife manager for Colorado Parks and Wildlife, said for the past few weeks, reports have been flying in about a juvenile mountain lion hanging out by the Animas River, near the Island Cove Mobile Home Park, along the trail that follows Florida Road.

While the lion wasn’t showing aggressive behavior, wildlife managers were concerned about the amount of people walking and biking by. So when a report came in June 24 that it was resting right off the trail, CPW took the opportunity to tranquilize the lion with a dart.

“It was literally just hanging out there along the concrete wall, over the railing on the walking path,” Archuleta said.

CPW relocates mountain lions at least 140 miles away to make sure the wandering cats don’t find their way back into trouble areas. This particular lion was more than a year old, Archuleta said, and probably just separated from its mother. The lion was in good health, likely living the good life off raccoons and the infamous town deer, but was running too high of a risk of coming in contact with people.

“We have a lot of deer that live in town, a lot of pets, raccoons, and when you have that ample prey population, it attracts predators,” he said.