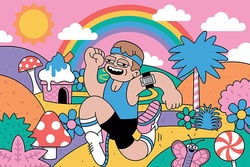 Move over endorphins. According to a new study, we can thank endocannabinoids, our internally homegrown versions of cannabis, for the euphoria we feel during exercise. In the study, which was written up recently in the New York Times, runners still developed the mild intoxication of runner’s high, even if researchers blocked the bodies’ ability to respond to endorphins.

Typically characterized by loose-limbed blissfulness and a melting of anxiety, the runner’s high was first attributed in the 1980s to endorphins, after scientists noticed increased blood levels of the natural painkillers in runners. More recently, though, scientists grew skeptical because endorphins cannot cross the blood-brain barrier, meaning even if runners’ blood contains extra endorphins, they do not reach the brain and alter mental states. It also is unlikely that the brain itself produces more endorphins during exercise, according to recent studies.

Rather, endocannabinoids are the likelier cause. Similar to cannabis, cannabinoid levels made by our bodies surge when we run and do other uh, “pleasureable” things, and can cross the blood-brain barrier, too.

Based upon previous studies on mice, Dr. Johannes Fuss, of the University of Hamburg-Eppendorf in Germany, wanted to see if the cannabinoid theory held true on humans. His new study, which was published in February in Psychoneuroendocrinology (which requires a Phd just to pronounce), Fuss and colleagues invited 63 runners, male and female, to the lab. Half were randomly assigned to receive naloxone, a drug that blocks the uptake of opioids, and the rest, a placebo.

The volunteers then ran for 45 minutes and, on a separate day, walked for 45 minutes. After each session, scientists drew blood, conducted psychological tests and asked volunteers whether they had felt a runner’s high. Most said yes, they had felt buzzed during the run, but not the walk, with no differences between the naloxone and placebo groups. All showed increases, too, in blood levels of endocannabinoids after running. In other word, their post-run euphoria was greater and anxiety less, even if their endorphins had been blocked.

The study does not explain, though, why runner’s high even exists (and why walker’s high doesn’t.) But Fuss suspects it has to do with our hunter/gatherer evolutionary past. “When it became necessary for humans to hunt wild animals by long-distance running … it is beneficial to be euphoric during running,” he noted.