Not your dad's jorts 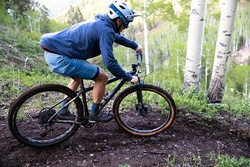 The sp-jorts were the idea of Aspen resident Elliot Wilkinson-Ray, who launched Ripton & Co., an online start-up last year.

“The idea was to create a young brand with a lot of spunk, a lot of personality,” Vermont-native Wilkinson-Ray said. “We are taking an object from the ’90s that was ubiquitous in that time period and we are making it really comfortable, we are making it a little bit technical – we are just updating it.”

After launching online sales last year, Ripton quickly sold out of product and hopes to ship out its second batch soon.

Wilkinson-Ray said his inspiration for athletic jorts goes back to 2014 when he was working for Kitsbow, a San Francisco-based company that makes cycling apparel. With a more sophisticated clientele, Kitsbow didn’t take to his idea of athletic jorts, so he took the idea with him to Aspen when he moved to the area three years ago.

“I thought the sports jorts for the athlete was something that was not happening. It was kind of a fun idea,” the 33-year-old said. “It will be something people want to wear to the Fourth of July or to a baseball game or to go hiking or mountain biking with our buddies – kind of a broad range. We did a lot of skiing in them this spring.”

The company’s name comes from the small mountain town of Ripton, Vt., near where Wilkinson-Ray grew up.

As of now, action sport jorts are only available online at riptonco.com, or via a quick five-hour drive north (Simply shoot them a message on Instagram @ripton_co and they can make it happen, they say). As with all things Aspen, the price may be a little steep for your average dirtbag biker at $89 a pair. But then again, think of all the action you’ll get.