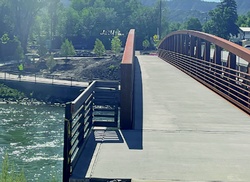 Apparently, it’s ground-breaking season in Durango. The first event was held Monday, with the groundbreaking ceremony for the “Animas City Park Overlook,” a mixed-income housing development at 150 E. 33rd Street.

The Animas City Park Overlook project is a walkable, infill residential development with 22 townhomes in a prime location in north Durango. The majority of the units will be reserved for local the workforce and long-term residents, with some deed-restricted units as well.

“This project is a pioneering and replicable example of how the Urban Renewal Partnership and other community institutions can partner with private sector entities to accomplish community objectives,” Scott Shine, Assistant Community Development Director, said in a prepared statement.

Found throughout the country, urban renewal authorities (URAs) are local redevelopment organizations that promote public- private partnerships to shape economic growth. In May 2020, Durango City Council unanimously voted to establish a URA, known as the Durango Renewal Partnership. The entity works hand-in-hand with local government and community partners to facilitate redevelopment and reinvestment that reflects community values and economic goals, according to the city’s website.

A spokesman for the City said the application process for the new housing project is currently being set up.

The second event Wednesday evening marked the grand opening of the 32nd Street pedestrian bridge. With the completion of the bridge, people can now travel 9 miles from Oxbow Park & Preserve at the north end of the trail to River Road by Home Depot on the south end without having to cross traffic.

“This project is many years in the making,” Parks and Recreation Director Ture Nycum said in a statement. “The foresight, planning and hard work from the community, elected officials and staff to make this a reality is a testament to Durango’s will and determination.”

The project was not without detractors who questioned spending $3 million on the project given all the other community needs. The funds, however, came from sources reserved for recreational purposes: half from the city’s 2015 sales tax (which can only be used on parks, open space, trails, etc.) and Great Outdoors Colorado, an organization funded by state lottery proceeds.

Next up for the ART: an upgrade to the last remaining segments with cracked pavement, and the biggie: the SMART 160 extension, which will connect the trail to Three Springs.