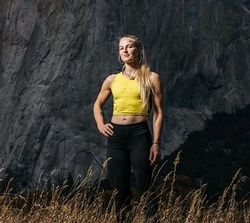 Harrington pulled herself over the lip, her head bloodied and bandaged, 21 hours 13 minutes and 51 seconds after she began. This was her fourth attempt at breaking the 24-hour timeline on the 41-pitch ascent. Only three other climbers have accomplished the feat in a day.

She was accompanied by none other than friend and Mr. Free Solo himself, Alex Honnold. Not a bad choice in belay partners.