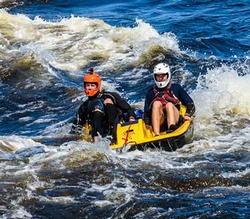 Speaking of whitewater, the latest in pushing the envelope of highly questionable river craft is here: pedal boating. Yes, those squat, two-seater fiberglass contraptions more at home on Golden Pond than Class IV.

According to a March 27 story in Paddler (which may or may not have been an early April Fool’s joke), Canadian buddies Caleb Roberts and Marc Godbout have been taking grandpa’s cruiser down huge features on rivers like the Ottawa and Gatineau. Their online video exploits even caught the eye of recreational boat manufacturer Pelican, which offered them a free boat to do what they do, so long as they include a disclaimer stating the boats are not designed for whitewater.

Does this make them the world’s first semi-pro pedal boaters? “To say ‘semi-pro’ suggests there is a higher level to attain,” Roberts quipped.

He calls Pelican the “Apple” of pedal boats and credits the Monaco model as being a key to their success. “It doesn’t hold a cooler, but it’s smaller and nimbler than some other models,” he explained. The two draw the line at paddles for auxiliary power. “It’s important, at this stage, that we keep the sport pure,” he argues.

And what might come next? Roberts has his sights set on expeditions. “It’s the next frontier,” he said, adding he had a lengthy email exchange with the National Park Service on what type of boat could be taken down the Grand Canyon. Turns out, his pedal boat would be OK.

“We haven’t figured out how to boof yet, but when we do, the sky’s the limit.”