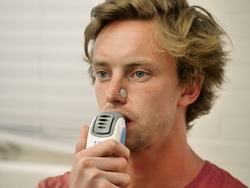 Why spend all that time in the gym drinking Muscle Milk when you could get the same health benefits from simply breathing hard for five minutes?

Ok well not exactly, but kind of.

The technique is called “High-Resistance Inspiratory Muscle Strength Training” and was developed in the 1980s to help respiratory patients strengthen their breathing muscles. Basically, it entails inhaling vigorously through a hand-held device. “Imagine sucking hard through a tube that sucks back,” the study’s lead author, CU researcher Daniel Craighead, said in a press release.

In recent years, researchers have been testing whether 30 inhalations a day at high resistance, six days a week, could help cardiovascular, cognitive and sports performance. After a six-week study on some patients with above-normal blood pressure, researchers saw blood pressure dip nine points on average. Such a reduction exceeded results from walking 30 minutes a day, five days a week as well as some blood pressure drugs.

“There are a lot of lifestyle strategies we know can help people maintain cardiovascular health as they age. But the reality is, they take a lot of time and effort,” said Craighead. “IMST can be done in five minutes in your own home while you watch TV.”