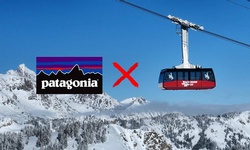 In a world where politics have infiltrated nearly every facet of daily life, even the ski world is not immune. Recently, iconic outdoor sportswear company Patagonia, which has never shied away from political and environmental activism, announced it would pull its products from Jackson Hole Mountain Resort. The announcement came after resort’s owner Jay Kemmerer hosted a fundraiser for the far-right “House Freedom Caucus” group.

According to a report in WyoFile, the event was attended by controversial figures like former Trump Chief of Staff Mark Meadows and U.S. Rep Marjorie Taylor Greene, who has supported conspiracy theories of election fraud and that the Parkland and Las Vegas shootings were planned, and, on more than one occasion, said Democrats eat babies.

Patagonia, for its part, mostly took issue with the caucus’ denial of climate change and alleged efforts to suppress voter rights. “This is very much about staying true to our strong feeling and our responsibly as a benefit corporation to stand up for and advance our priorities, our policies to protect our planet and our communities,” a Patagonia spokeswoman said.

This is certainly not the first time Patagonia has put its priorities over profits. The company has long donated 100 percent of sales on Black Friday to environmental groups and even sued the U.S. government in 2017 after Trump reduced the boundaries of Bears Ears and Grand Staircase-Escalante national monuments. More recently, Patagonia stopped advertising on Facebook and Instagram to protest the spread of misinformation on climate change.

In a statement, Jackson Hole Mountain Resort said it has a long history of reducing energy consumption, recycling and protecting habitat. The resort also said it is the largest mountain resort operating on 100% wind power. In an email to employees, Kemmerer defended his “personal beliefs and values” and underscored that the event was not hosted by the resort but was a private event.

Boycotting or supporting brands and businesses because of political beliefs is increasingly the new normal, on both sides of the political divide. But politics in the ski industry? It does happen. Back in 2017, Purgatory Resort pulled its ads, which were part of a larger media buy, from the controversial far-right website Breitbart News. Also at the time, Vail Resorts was accused of supporting an anti-climate-change super PAC.

So where can we escape the polarization of politics? Maybe something innocent and sweet that we can all agree on, like … frozen yogurt.

Oh, wait. Crap… Maybe just turn off your phone and hit the slopes.