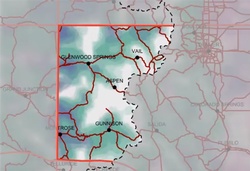 Two years ago, Colorado voters approved a ballot initiative that forced the state to reintroduce gray wolves by the end of 2023. That initiative, however, didn’t specify where wolves should be released, other than on the West Slope.

According to Colorado Public Radio, a newly obtained map shows a broad area wolves will be released, which stretches between U.S. Route 24 and Montrose and Glenwood Springs and Vail to the north and Ridgway to the south. The Continental Divide forms the eastern boundary.

Colorado Parks and Wildlife told CPR that wildlife officials looked at both biological factors, such as where wolves would find prey (elk and deer), and also which communities would tolerate the controversial species. For example: the area north of I-70 contains the best wolf habitat, yet has a higher potential for conflict, because most people there voted against wolf reintroduction. It should be noted, wolves have already naturally migrated from Wyoming into northern Colorado.

Mark Ditmer, a research ecologist with the U.S. Forest Service and lead author of the study, told CPR southwest Colorado is a more welcoming landscape for reintroduction. He said research showed the mountains between Aspen and Durango is a zone with enough prey and higher levels of acceptance.

La Plata County voters went 18,015 in favor, 16,140 against wolf reintroduction. Statewide, the ballot narrowly passed on a 1,590,299-1,533,313 vote, largely due to residents in Denver and along the Front Range. It was not clear at press time whether releasing wolves onto the streets of Denver was considered.

Oddly, though, the map doesn’t include the Weminuche, which has been discussed as an ideal spot for wolves. The Weminuche is the largest wilderness area in Colorado at nearly 500,000 acres (and it may just be the map is not an official boundary). Regardless, wolves are wanderers, and it’s an all but sure thing they eventually will come down here.