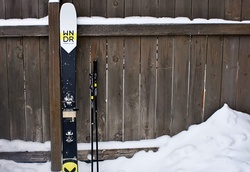 Last year, Matt Sterbenz, the founder of 4FRNT skis, launched a new line of skis, WNDR Alpine, made from a proprietary high-density algal core that drastically cuts back the use of petrochemicals in ski manufacturing. WNDR is partnering with Berkeley, Calif.-based bio-tech company Checkerspot.

“Since the introduction of biobased resins, ski building simply hasn’t kept pace with other outdoor categories and adjacent industries,” Sterbenz wrote on his website. “True innovation requires a complete shift of focus while taking a bold step into uncharted terrain.”

WNDR Alpine launched its first ski in 2019, the Intention 110, a lightweight, reverse-cambered backcountry ski. This year, it also launched the Vital 100, a traditional-cambered ski meant for the resort. Both skis employ WNDR’s “Algal-Tech” core, designed to reduce weight while improving stiffness and stability – essentially replacing what carbon does for a ski in a more environmentally friendly package.

But how do they ski? Writing last February for Powder magazine (RIP), Lily Krass reports: surprisingly good. “Like many in the industry, I was intrigued, albeit a little skeptical that swapping carbon inserts for some algae substitute would perform as well on snow,” wrote Krass, who tested them during a record-breaking January storm cycle in the Tetons. “I have to say, it’s probably one of the most fun skis I’ve ever hopped on.”

Krass noted that the Intention felt smooth, stable and much damper than many other carbon backcountry skis she’s tried. She also found it easier to negotiate tricky terrain and link turns in tight and steep situations. “I found myself survival skiing through breakable crust … and was astounded at how easily I could hop in and out of turns. It wasn’t pretty, but it wasn’t nearly as terrifying as it should have been,” she wrote.

In addition to earth-friendly materials, the skis also come in a reusable ski bag to minimize excess disposable packaging. WNDR also has a “Takeback Program” that allows customers to send back skis within three years for a 20 percent discount off upgrades and encourages folks return their skis at the end of their life so they can recycle and repurpose the materials.

If all this sounds Tesla-like spendy, the WNDRs are surprisingly reasonable, going for $699. Being the first one on the lift or skin track on algae skis: priceless.

To learn more, go to www.wndr-alpine.com.