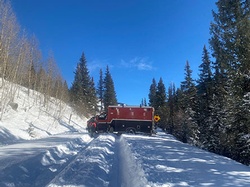 Recently, another big truck went off a main highway in Southwest Colorado, apparently trying to take a “short cut” led by a GPS system, and became stuck on a narrow mountain road. Oh, and it’s winter, so there was a couple feet of snow that added to the driver’s plight.

The incident happened on South Mineral Road, just off Highway 550 near Silverton. In the photo, it appears – an ambulance? an armored vehicle? a Boar’s Head delivery truck? – took a really, really wrong turn.

“Have you ever set out to the woods only to find out that your phone’s navigation app led you astray?” the Forest Service wrote. “Regular road navigation apps don’t know when forests close roads seasonally for snow, if high-clearance 4x4 is required, or that a certain road might be a four-hour drive and not a 40-minute one.”

It seems people trusting blindly in GPS, and then getting into very dangerous situations, is becoming increasingly more common on the mountain roads of Southwest Colorado.

To name just a few: In Oct. 2020, a 30-foot truck got stuck on Engineer Pass, one of the most difficult and steep backcountry roads in the area. This past June, a box truck driver following a route between Montrose and Silverton ran aground on Ophir Pass. And in December, a woman slid off a snowpacked road near Dolores. When her husband came to help, he too was swallowed up by snow.

Oh, and worst of all, a regional manager and the assistant to the regional manager, on their way back to the office from a business meeting, followed GPS and drove into a lake.

OK, that last one was Michael Scott in Season 4 of “The Office,” but you get the idea. More people are trusting in GPS and, on a sober note, are putting themselves and others at risk.

It’s kind of the perfect storm: relying on GPS for travel routes is by far becoming the norm, and at the same time, droves of people from out-of-state are moving to Colorado or just passing through on road trips (especially since the pandemic).

CDOT does its best to get messaging out to travelers to stay on paved roads, especially in winter, Schwantes said. But at the end of the day, people need to take some responsibility. “If you’re a newcomer, learn the area you’ve moved to,” she said. “And for travelers, stay on U.S. and state highways; venturing off onto a forest road is not a wise thing to do. We need to use some common sense.”

In other words, four-wheel drive is no substitute for brains.