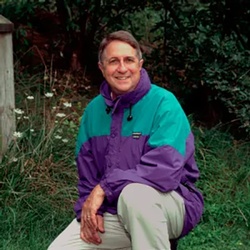 While America mourns the loss of Ruth Bader Ginsburg, outdoor geeks are also marking the passing of another RBG. Robert “Bob” Gore, the inventor of Gore-Tex, passed away Sept. 17 at his home in Earleville, Maryland. He was 83.

Over the course of half a century, Gore’s name became synonymous with the lightweight, waterproof, breathable fabric prized by outdoorsy types and found on mountaintops and rivers throughout the world. Not only did he build a name for himself, he also built a multi-billion-dollar company known for its innovation and democratic treatment of employees.

Born on April 15, 1937, in Salt Lake City, Gore graduated from the University of Delaware and went on to get a PhD in chemical engineering from the University of Minnesota. Although he received his first patent in 1959 for a ribbon cable used in computing technology, he is best known for his invention that came 10 years later and rocked the outdoor recreation world.

As an employee at his parents' company, W.L. Gore & Associates, he stumbled upon a discovery that a polymer called polytetrafluoroethylene, or PTFE, commonly used in Teflon, could be stretched into a new substance. This new material, which contained about 9 billion pores per square inch, allowed air, but not water, to pass through, thus solving the age-old conundrum of soggy, clammy waterproof clothing. He dubbed the new wonder fabric "expanded polytetrafluoroethylene” – but it didn’t exactly roll off the tongue and soon was shortened simply to Gore-Tex.

W.L. Gore & Associates began licensing Gore-Tex to manufacturers in 1976 mostly for raincoats and tents. But later the iconic material would be adapted for use in countless products across the medical, defense and aerospace industries as well.

In 1976, Gore took over the family business, instilling a rigorous culture of innovation and employee empowerment. All facilities were limited to about 200 employees, most of whom were given the title of "associate," and many big company decisions were voted on democratically.

“Bob appreciated that innovation can arise from many different places if entrepreneurial spirit is encouraged and fostered,” current Gore CEO Jason Field said. “Innovation as activity, doing things with your hands, experimenting, testing and observing, was instilled in our enterprise consistently and productively throughout Bob’s tenure.”

Today, W.L. Gore & Associates does $3.8 billion in annual sales and employs more than 11,000 people across the globe. Gore himself ran the company until 2000 and continued to serve as chairman of the board until 2018.