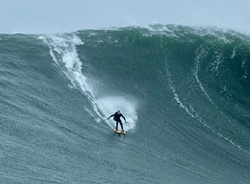 While the first person to complete such a stunt, it is not a new one for Patterson, 42, who is probably the world’s most famous – and loneliest – big wave skier. Growing up in Tahoe, Patterson spent his life on skis and has been skiing the ocean for years. But Maverick’s – which has seen “once in a century” swells this winter, even for Maverick’s – has always been on the bucket list for this SoCal uh, skurfer, who now calls Orange County home.

In the jaw-dropping, knee-defying moment, Patterson can be seen in what looks like a dear-god-don’t-catch-an-edge stance before making a respectable carve up the face. He was caught on video and got not just the Maverick’s line-up but the twitterverse abuzz with respectful gnar points.

"It was absolutely epic. I am stoked for the last-minute road trip and the first turns of the winter season," he told the website Surfer Today. "I love to keep it spicy and to slide down liquid mountains. It was truly amazing to see Mother Nature flex its magic."

For the nonsurf aficionados out there, Maverick’s is considered one of the most powerful, dangerous – and prestigious – waves on the planet, breaking in cold, shark-infested waters. Located in Half Moon Bay, the area is known for its tricky currents, submerged rocks and jutting cliffs, waiting to shred your washed-up board (or boards, in this case) to splinters.

When not hanging on for dear life at Maverick’s, Patterson is a regular lord of boards, skiing, surfing, snowboarding, windsurfing, kiteboarding, paddleboarding and doing something called speed flying, which we’re pretty sure does not include a board but possibly a squirrel suit.

As for Maverick’s, Patterson said he wished he could have caught a bigger wave, but he’s content with his feat. "At the end of the day. It's all about doing out-of-the-ordinary things that put a smile on your face while staying positive during these crazy times," he said.