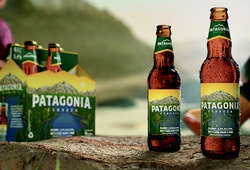 Astute readers may recall a story in 2016 on the debut of Patagonia beer, a collaboration between New Belgium and everyone’s favorite fleece maker. Even more astute beer drinkers may have noticed a suspicious “Patagonia Cerveza” lurking at local liquor and grocery stores.

Here’s where the foam thickens. That newest iteration, with the mountain logo that kinda sorta vaguely resembles Patagonia’s trademark Fitz Roy skyline, is in fact a product from none other than Anheuser Busch.

That’s right. Before you snatch up a sixer thinking you’re going to get warm buzzies from a sustainably minded B-Corp., think again.

Apparently, AB trademarked the “Patagonia” beer name in 2012. AB acquired the name from a South American company, Patagonia Brewing Co., which was the American-branded name of an Argentinian beer Cerveza Patagonia, which launched in 2008. Shortly after releasing their beer, Patagonia and New Belgium quietly removed it from

shelves upon receiving a cease and desist from AB. But now it seems Patagonia is having a hard time swallowing AB’s marketing campaign for the like-named brew. In addition to holding “pop ups” in ski towns featuring black-puffy-clad employees with “Patagonia” emblazoned across their chests, the brand also pledges to plant a tree for every case sold. (Strangely, amid the green-washing, there is no mention that in 2018, AB spent $1.3 million on campaign contributions, the vast majority of which went to anti-climate-change Republican PACs and candidates.)

Naturally, fans of the real Patagonia began to smell something fouler than last week’s Capilene. Before long, the powers that be at Patagonia got wind and filed suit against AB. The outdoor retailer alleges AB is deliberately trying to confuse beer drinkers – who tend to be easily confused – and profiting off Patagonia’s earth-friendly reputation.

“They are deliberately attempting to take advantage of the hard-earned reputation that we have built over the last 40 years,” Patagonia spokesperson Corley Kenna told Outside magazine.

In addition, Patagonia claims that the U.S. trademark was procured illegally.

For its part, AB says the lawsuit is without merit. But the law may be on the underdog underwear-maker’s side. The litmus test for trademark infringement is whether consumers are likely to be confused, for which screenshots should supply ample evidence. Additionally, AB may be guilty on grounds of dilution (unfortunately we’re not talking watered down beer, although that should be a crime.) In the legal sense, dilution refers to using a nearly identical logo that diminishes the plaintiff’s mark and tarnishes its reputation.

To judge for yourself, check out Patagonia Cerveza’s marketing clip: www.youtube.com/ watch?time_continue=18&v=vBSOFVXi2ag. In the meantime, if all this leaves a bad taste in your mouth, wash it down with Patagonia’s new beer, Long Root Wit.