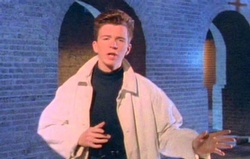 Well, it’s taken more than 10 years, but the Telegraph finally got Rickrolled.
Readers who tried to click on the 9-R school lunch petition link in Shan Wells’ “Retooned” last week may have found themselves singing along to British crooner Rick Astley’s 1987 megahit, “Never Gonna Give You Up” instead.
For those not in the know (which, sad to admit, included a few of us here at Tele HQ) “Rickrolling” is a phenomenon whereby unsuspecting web perusers are high-jacked and treated to a video of Astley’s guilty-pleasure earworm.
True, there are much worse fates to befall unawares internet surfers. For example, our Rickrolling merely took us to a Youtube site, whereas past forms have been known to take over entire computers, playing in perpetual rewind until one reboots (adding new meaning to “Never Gonna Give You Up.”) And we can probably all agree baby-faced Astley and the parade of ’80s hairdos (and don’ts) are much preferable to the “bearding” rampage of the early 2000s.
Of course, Astley, who was made a millionaire at the age of 22 by the song, is having the last laugh. “I think it’s the cheesy video,” he told Chicago talk show “The Jam” of the song’s longevity. “It’s nuts – but it’s been amazing to me. … it’s nice that that song got kind of taken out from under its rock.”
Even Astley himself – who admits to wearing all his own clothes, including the iconic trench coat, in the video – has fallen prey to the prank. “I’ve been Rickrolled by a few friends,” he said.
And, he’s in good company. Since 2009, the Rickrolling Youtube site has had 652M ­views. Apparently no one else wants to give it up either.
As for the non-Rickrolled partial-lunch petition website, go to: chng.it/G8wtYyRCjd.