99 problems but a poodle ain't one 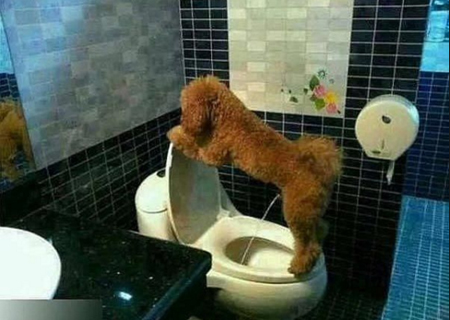 Let’s just pick up right where we left off: biking and climbing.

Tim and I had struck a compromise in our bromance, and we decided the other Saturday we’d go biking in the morning, and climbing in the afternoon. A match made in heaven. But, things had gone awry before we even left the parking lot. It all started with this poodle.

The poodle’s owner showed up, and being parked next to each other and all, we exchanged pleasantries. You know, phrases like “it’s beautiful day,” “we’re so lucky to live here” and “my poodle is not an ordinary poodle, it’s an outdoor poodle.”

I look over, and the poodle is peeing on our gear. Golden poodle showers all over my rain jacket and backpack.

The owner looks over and apologizes, but does not discipline the dog. That’s when I lost my shit, but in a slow motion sort of way. The anger built, and by the time the owner of the Lamest Dog in Durango is gone, I’ve finally thought of the right explicative to say to the guy.

My anger was necessarily not with the peeing poodle, but rather the owner’s lack of discipline to the dog. Isn’t that in the 10 Dog Commandments, “thou shall not let your dog pee on other people’s things and get away with it?”

These are the same dog owners that leave the plastic bags of poop on the side of the trail and never come back to pick them up. As if there’s some magical “poop patrol” division that comes along with a drone and snags that poop and disposes of it properly.

How much can I vent about bad dog owners? Other than the pee incident, Tim and I had a magnificent day, 10 miles of biking and some great pitches of climbing in Cascade Canyon. For some people, this is a vacation, for us Durangatangs this is just a Saturday.

I’m over the pee, but back to the anger. I am someone who is motivated by anger. It fuels the fire in many ways. I’ve experienced a daily anger whenever I read the latest actions and comments from our president. It makes me angry that we know he’s complicit in crimes, and quite possibly crimes that allowed him to be elected president. Yet, he still gets to make the next Supreme Court appointment and continue to shape our nation’s future even though we know he is a criminal.

That situation, ultimately, is out of my control. But, the anger over Trump is still as present as it was that fateful day when he was elected. Ultimately, I felt drawn to do something, to become a more active citizen. I’ll admit, I felt more drawn to act based on the anger I felt about Trump than the inspiration I felt from Obama. Although, when Obama got elected, I’d just lost my job in the aftermath of the economic crisis and was more worried about putting food in my stomach and gas in the old car.

So what’s a writer-climber-sometimes biker to do when he wants to be a better citizen? For me, it was becoming more active in the local and regional climbing community. I know it sounds like a stretch, but after consulting everyone I know in politics and the nonprofit activist world, and soul searching, it seemed like the most reasonable and attainable action.

Of course, the Bears Ears National Monument issue has received a lot of attention after the president rescinded the designation earlier this year. I just ran into Josh Ewing, the director of Friends of Cedar Mesa, and the group is about to unveil the Bears Ears Education Center in Bluff later this month. This is one of those “we the people” moments: the government wasn’t going to follow through with protecting this land, so they decided to educate folks visiting and curious about America’s newest national monument. Of course, the ultimate fate for Bears Ears will lie in the court system – several entities have sued the U.S. government charging that it is illegal to rescind this designation.

On the home front this year, I’ve focused more energy on our local Climber Beer Nights at Carver’s and creating a new climbing advocacy group called the Durango Climbers Coalition.

Climber Beer Night started out of a simple statement an old climbing partner made one day after an online debate got out of control, “You know there’s so many climbers here that don’t know each other, it would be cool to do something to bring everyone together.”

I teamed up with Tim Foulkes (that overstoker biker guy) and power couple, Eric Dixon and Brooke Ingle. With the support of the Carver’s team, we’ve created a quarterly get together for five years running now which has also raised a few thousand bucks for a variety of nonprofits. The next one will be this Tues., Sept. 11, and we’ll be raising money for the Range of Motion Project (ROMP). It starts at 6 p.m. and is always a good time.

That night we’ll also announce the Durango Climbers Coalition and why we’re starting it. In short, there’s a strong need in around here to maintain and preserve our climbing areas and be a positive collaborator with the government agencies that manage these gems.

So if you’re of age, please come down and have a beer with us on Tuesday – just leave the poodle at home!

Luke Mehall is the publisher of The Climbing Zine and author of American Climber. If you’d like to learn more about the Durango Climbers Coalition he can be contacted at lukemehall@gmail.com.