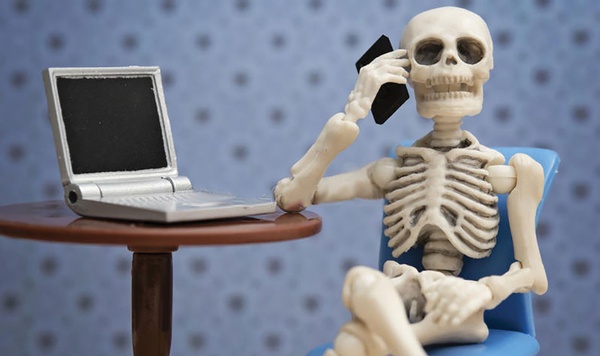 Opening my laptop is like flipping a coin. If it’s heads, I’ll have a pleasantly productive experience; if it’s tails, I’ll be dragged into a swamp of frustration by the jaws of a virtual crocodile surfacing from the stagnant backwaters of my technological ignorance. I reasoned that a call for help would be practical, but the telephone tech service session took more than an hour, and that’s after having spent close to an hour trying to solve the problem myself.

If I say it turned out to be an issue of firewall, privacy, group/user protocols and software, then I will have muddied the technological waters enough to save myself from total embarrassment. But for those tech-savvy individuals who already have an idea of where I’m going, please be patient. It also takes me an extraordinary amount of time to compose an explanation.

I’d lost my serenity with the locked screen that appears at every startup, which requires typing a password just to gain access to my own computer. Inevitably, the password I type will be rejected at least once, and all because when I first bought this device, I believed setting it up myself was a straightforward task.

When I explained this to tech support, I received the obligatory disclaimer about the danger of not following security protocol. I told him that I was the only user, and my computer was nothing more than a typewriter without a ribbon sitting on my actual desktop.

Then he asked for permission to access my computer to see my screen so he could use his cursor to direct me, and I was both amazed and slightly horrified. With his voice in my ear and his eyes on my desktop I kept reminding myself that I was the one who invited him into my home.

Only three commands were needed: open preferences, choose users and groups, and change the automatic login. It sounded straightforward, but even he/we couldn’t access the little box where a single checkmark would rid me of my password requirement.

He asked, “What version of software are you running?” I replied, “Whatever version the computer downloads in the middle of the night while I am sleeping.” He showed me where to check, and the software required yet another update, so I selected the update option, and we waited. The computer anticipated at least 30 minutes upload time while the little white line crawled incrementally out of the swamp and toward the dry shore.

Internet service in the hinterland is a delicate subject to broach, especially when the person you’re talking to is half a continent away with the download speeds of a yellow jersey-clad Tour de France champion.

I asked him where he was located, and it turned out to be a Minneapolis suburb very close to where I grew up. We talked about snow, the Vikings and the Twins. After 10 minutes, as if the phone line had gone dead, we’d run out of things to say. Even his cursor stopped moving. I wiggled mine but he didn’t wiggle back.

“Only 15 minutes left,” I announced, to see if I’d been disconnected before I remembered he could see the display himself.

It occurred to me that my tech advisor and problem solver probably spends hours of his day being paid for these idle stretches, and I don’t mean idle as lazy or unproductive. I mean it more philosophically, as a period while the great lathe of the digital universe turns and turns against the dull cutting edge of time.

I introduced a few anecdotes about growing up in Minnesota, fishing and mosquito infestations. He responded with an occasional grunt before slipping back into silence. What I concluded from his reticence to talk was a corporate directive might be discouraging chattiness, so I followed the protocol and simply moved my cursor every five minutes to rest at the tip of the alleged advancing line just to prove to myself that it had indeed moved.

Eventually, the download ran its course and finished. I experienced an incremental burst of adrenaline. “Finally, we’re on to new territory,” I announced into the phone. “Not quite yet,” he replied, “the download still has to be installed,” and, just as he said this, a new white line appeared on the screen, acknowledging another 20 minutes to complete its task. He must have heard me sigh. “Don’t worry,” he said, “it won’t actually take that long.”

About 19 minutes later, I was directed to restart the laptop so the new software update would launch, so I asked him if the term “reboot” meant the same thing as “restart,” because I felt an urge to move things along with a swift kick. I think he gasped or chuckled. It was difficult to tell the difference.

In the end, only three steps were needed: open preferences, choose users and groups, change the automatic login box. And just between us, I put that checkmark firmly into its spot with a swift and decisive CLICK!