An officer and a gentleman
Tony Schrier traveled many oceans in his time, but Bayfield was home 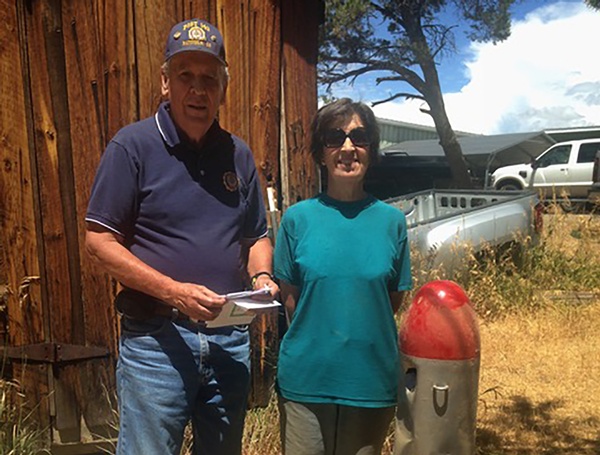 Tony Schrier with Monica Smith, who discovered and donated the WWII era bomb.

My phone vibrated, flashing with an incoming call from Tony Schrier and interrupting the quiet of my volunteer shift at the Pine River Valley Heritage Museum. It was July 21, 2017, and Tony informed me: “We’re going to pick up a bomb.”

His wife of then-46 years, Anne, would fill in for me, Tony explained, as we dashed off to visit Monica Smith. She’d unearthed a World War II-era bomb while cleaning up the 17 acres south of Bayfield that she purchased in 1978 with her late husband.

Tony theorized that the hollow bomb was probably from a test site in Utah. He accepted the donation, researched and painted the bomb in the appropriate olive drab of the era and promptly hung it up over the military display in our free museum on Mill Street in Bayfield.

That was Tony Schrier – always active, always embracing history, always honoring the military, always leading the way. Whether it was the Heritage Society, the American Legion, the Forest Lake Metropolitan District or just shooting pool at the Senior Center, Tony was one of those rare can-do people upon whom this community relies to thrive.

Only seven months ago, I watched him get down on hands and knees with a carpet cutting tool, measuring and trimming a remnant of donated Astroturf to fit into the museum’s front entryway.

Before Tony died at 77 on April 21, 2022, he’d written a 13-page essay about his “odyssey” – a life that took him from his war-scarred Holland birthplace in 1944 to his father’s job in Morocco to high school in Las Vegas, Nev., then off to Vietnam as an Army staff sergeant, truck driver and dispatcher from 1965-68. With a month left before his transfer to Germany, the Viet Cong launched a surprise Tet Offensive in 1968 “and holy hell broke loose,” Tony wrote. He returned to San Francisco, greeted by “long-haired hippies” calling him a baby killer.

As a kid, Tony found himself in classrooms where teachers spoke Dutch, French, English and Arabic. His life journey would include stops in Spain, Germany, Minnesota, Texas, Chicago, Denver and Utah.

All the while, Tony braided his street smarts, international schooling and a couple years of college at the University of San Francisco to rise to prominence in the world of finance and banking at places such as Citicorp – then the nation’s largest bank.

His titles over the years included Chief Operating Officer and Senior Vice President, but Tony wrote in his mini-memoir that he’d simply developed a “reputation as a problem solver.”

In the late-1900s, Tony’s trouble-fixing odyssey wound up in Bayfield, where he and Anne purchased property in 1996 and built their red-roof cabin in 2000 high up in the twisting hills of Forest Lakes.

“It’s amazing how many oceans he’s traveled in his lifetime,” Anne said shortly after the man she called her Dutchman sailed away one last time. “For a kid born in a war-torn environment, he accomplished more than most and shared his many talents with others.”

I’d put off reading what Tony had written until word came that he’d passed. Acute leukemia had snatched the tireless community volunteer’s once limitless gusto in the seven months since he was trimming that entry carpeting. He’s survived by his sidekick of a half-century, the equally inexhaustible, involved-in-everything Anne, along with their daughter, Laura. A married mother of teenage daughters Alexis and Anika in Minnesota, Laura kept her maiden name Schrier. With pride, Tony claimed that helped her climb the corporate finance ladder – “I had lots of connections.”

One anecdote from Tony’s story is well worth sharing:

Food was scarce in Holland when Tony was born there on Oct. 17, 1944 – the start of the last winter of WWII in Europe. Struggling to feed his family, Tony’s father traded his Bulova watch for a pound of beans. His parents peeled the beans and ate the shells, leaving the soft inner section for Tony and his older brother, Paul.

Back in Holland in the late 1960s, on leave at the end of his military hitch, Tony was visiting his Aunt Mary, who helped him locate a Bulova watch like the one his father had bartered away two decades before.

Tony sent the watch to his dad. “Two weeks later, I received a bag of beans in the mail,” wrote Tony, who cherished that watch until the day he died.

Tony didn’t want a funeral, but a memorial tribute is slated for 10 a.m., Sat. May 7, at the Veteran Memorial at the Bayfield Cemetery just north of Highway 160 on County Road 501. Tony planned and helped build the memorial, adorned with plaques honoring the Pine River Valley’s veterans. It was among the last of his countless community contributions.