Another chunk of coal

The exact age when I fervently wished I owned a horse is difficult to pin down, but I suspect it was early. I remember badgering my parents about it, and I couldn’t stop riding it around in my brain. My first full time thought and it had to be about a horse. I spent my days from dawn to dusk thinking about it. Maybe I’d reached the age of 4, or 5, or even 6. Right now it doesn’t matter, because that horse has been put out to pasture for more than half a century. What’s worse is that I can’t remember why I so desperately wanted one.

Of course, I never got a flesh and blood horse like the children in the movies always received. Mine had the misfortune of being molded out of plastic. It stood about 8 inches high with moveable legs and a saddle that could be attached, removed and reattached by lining up little plastic pegs conveniently fitted into holes located along the top of the horse’s rump.

After my parents brought the horse home for Christmas, it didn’t take long for some of the pegs to break. Soon two of its legs hung limply and by New Year’s Day the horse had lost its charm. I’d have shot it and put both of us out of our misery, but I had to wait until my birthday before I could convince my parents to buy me a gun. 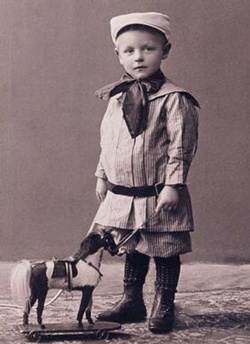 That’s how things have gone for most of my life, one blinding urge to own something followed closely by an urge to own something else. I’ve tried to moderate the impulse by shopping at thrift stores and yard sales, but in the end I guess I’m an obsessive materialist. The philosophy that less could be more sounds good on paper, and I want to believe it, but when applied to my lifestyle, the idea never works out. I also want to believe that in the end the meek shall inherit the earth, but I suspect it will only be because all the good stuff will have been shipped to other planets.

Still, for all the bad press that consumerism generates in America, useless things have their purpose: they force me to do things I don’t want to do in order to acquire them. These passions to own new things nudge me out of bed in the morning and send me off to work. They force me to persist when it might just be easier sitting matter what initially excites me, I always end up being the proud owner of one more useless thing.

I know it’s not just me, because my friends feel the same: often the products they buy appear to be manufactured with an eye toward their early demise. Even the plastic feels cheaper, and plastic is the main ingredient of a useless thing. Other characteristics to help define a product’s uselessness include an unusually glossy finish that attracts the eye, a secret compartment for batteries, and a set of instructions that claim to be written in English.

Just to be on the safe side, this year we bought a new house for Christmas, hopefully our last. The old place – which includes a barn – has been purchased by people who have horses. Real ones. Now I’m sorting through stuff we’ve gathered over the last 10 years, emptying shelves and drawers, digging deep into closets, and packing boxes that will need to be hauled to the new place. The move is both an exercise in winnowing and an illustration of habit. Not surprisingly, as I agonize about what needs to be discarded, I also realize the majority of the paraphernalia I’m sorting through belongs to me.

The new house, only 10 years old, is in good shape, though plastic is one of its components. Maybe as we get

older our toys just grow larger. What has captured my imagination though, is the thought that before we move in there’s a brief window of time when the new house will be empty. How easy to think that a house – any house – is just waiting to be filled.

My wife and I have agreed to NOT give each other presents this year, despite the fact that all through the Christmas-to-New-Year holiday we’ll be wrapping up boxes and opening them again at a new location. I’ll be gifting myself with the stuff I can’t bring myself to cast off, but I’m also going to pretend that everything I unpack is a new toy, a wish fulfilled, and then see how long that fantasy can last.