As the wheel turns 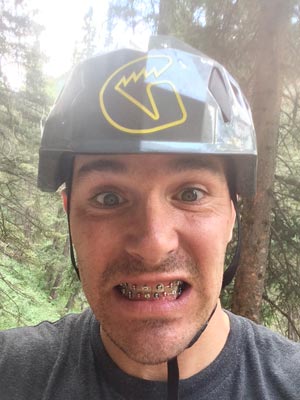 “Who are more nerdy: climbers or mountain bikers?” I asked my girlfriend, Amber.

I am both a climber and a mountain biker, but my identity is all wrapped up in climbing. Climbing saved my life, and all my best friendships have been formed through it. My job is to write about climbing and publish a zine about it. I love climbing, and though it’s currently once again going through some major growing pains, it’s definitely the love of my life in terms of a physical activity. (Although I’d argue climbing is also metaphysical, philosophical and spiritual.)

Shit, maybe that’s what Amber meant about the nerdy thing.

Recently, partly due to the fact that I’m dating a crusher mountain biker – and I’m closing in on 40 and having a mid-life crisis – I’ve had a renewed interest in mountain biking. I started biking before I began climbing, but I’ve always loved climbing and liked biking. It’s one of those things I’ll do regularly if someone suggests we do it, but I don’t miss it that much if not. But, given that I’m in this mid-life crisis thing, what I really want is a new bike.

You see for the last decade I’ve been plugging along (is that bike slang, I don’t know bike slang just yet) on a single speed. I first got psyched on single speeding through a late friend Adam Lawton, and I don’t know, maybe somewhere in my psyche I feel like every ride is a little tribute to him. And damn I wish I could go for a ride, a climb, an anything with that cat once again.

For the last few years I’ve been using my bike as a town commuter and maybe getting out on the trails a couple times a season. Now that I’m riding more, and especially out in the high country, I’ll get comments like, “Whoa you just did that on a single speed!” or “nice ride.” Now I could let those comments go to my ego, but I know what they really mean, “Your bike is old AF.”

So now I’m flirting with the second most expensive purchase in any Durangatang’s life experience next to home ownership: buying a new bike.

Some things have changed since I first bought my single speed. Apparently they don’t even use tubes in the bike tires now, and fill it up with left-over lube from the Trojan condom factory or something. Plus, the bike seats go up and down like a carnival ride from the 1980s, but with modern technology. I tested out one of these modern bikes the other day and they are more complex than this laptop I’m using to write this story. Figuring out the sweet spot on a mountain bike these days is like a straight guy in high school trying to comprehend the female anatomy.

My buddy Tim is another reason I’m selling my single speed soul in favor of new technology. He used to be a big drinker, and after he quit he found a new addiction: mountain running. A lifelong asthmatic, he went from 2-mile runs to 40-mile runs in just a couple of years. He left me in the dust along the way. During his first couple years of running, I’d coach him on getting up his mileage, and soon I was avoiding his phone calls because he wanted to do some insane mountain run that I had no interest in.

Soon enough, long distance running was making his body hurt, so he switched it up to biking. He got one of those fancy new bikes and got overly enthusiastic about riding. So, now if I want to see my friend, I have to get on a bike.

The other annoying part about our new mountain biking bromance is that somehow even though I’ve been biking for almost three decades now – started out in Minnesota at family camp, no big deal – Tim is already better than me. The guy has been biking for like six months, and he’s already doing 20-mile rides in the high country and riding down the steep stuff while I get off my bike and walk.

Some might say, “Luke, you don’t have to mountain bike.” Take up long distance mountain running or something, after a certain amount of miles everyone seems bad ass. Hardrock 100. Just mentioning those two words in a casual conversation would make you seem cool. But I’m a dirtbag who’s turning 40, and dirtbagging isn’t cool anymore. It’s so 2004. I mean Facebook wasn’t even around in 2004, and the Gram was just a twinkle in Zuckerberg’s eye.

In this mid-life crisis, I’m going to change with the times. Though this new mountain bike will max out my credit cards, I’ll get more so I can afford the new necessities for an outdoor adventurer. The latest trend: tents on top of your car. That’s right people, don’t spend a couple hundred bucks on a tent to sleep on the ground, spend $2,000 on a tent on top of your car! That’s the future, man. But, shit, if I put the tent on top of my car, where will I put my new mountain bike? Oh, that’s when one graduates to the Sprinter van. Got it.

If you’re going to have a mid-life crisis you might as well spend money on things you don’t really need to ensure capitalism keeps the world a spinning!