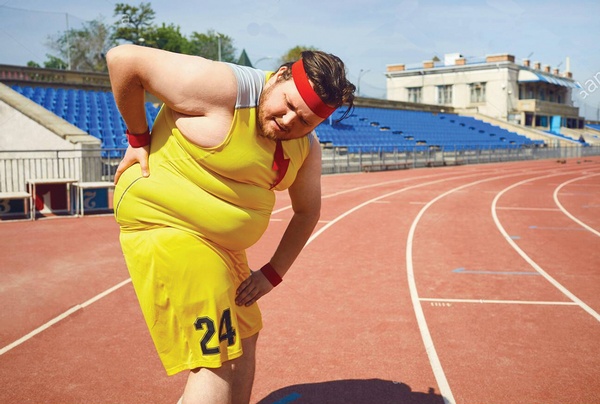 Let me start by thanking everyone who contacted me after my previous column, in which I lamented how age plus a pandemic turned my physique from a thin-crust pizza to a stuffed-crust pizza. I especially want to thank those who insisted I must be speaking hyperbolically; while your intentions were kind, I assure you that I really and truly could not button my once-baggy britches while also, at the same time, wearing underwear.

But even if my pizza bod were baked with skim-milk mozzarella (it’s not), and even if I really did look the same as before (you’re lying), I would not care about my measurements so long as I felt good in my body. Which, it seems, I do not. However, I would still choose this reality over the alternative of feeling good outside of my body, because that is a condition known in the medical community as being “dead.”

So, I have resolved to become more active once again.

I’ve been swimming. I’ve been paddleboarding. I went grocery shopping and parked two spaces farther from the front entrance. I went for a hike. That was on Day 8 of Being More Active, most notable not for the hike, but for its dual accomplishment of being Day 1 of Being Less Active, because I tweaked my back.

Now I must admit that I have never given birth. I can conceptualize that, for all the love and joy surrounding bringing a new life into the world, childbirth must really freaking hurt. But I cannot actually imagine the hurt. Just trying to conceive of any of my orifices dilating to double-digit centimeters and I’m already begging for the epidural.

If you are blessed enough by the gods and stars above never to have hurt your back, then similarly, you cannot truly imagine how it has to hurt at least as much as triplets.

This time, I tweaked my back because I stubbed my toe.

One moment, I’m strolling along an intensely moderate trail, not even particularly distracted by thoughts of lunch. The next moment, I can no longer move my leg independently of my torso.

Through sheer willpower and also shock-induced stupidity, I made it back to the trailhead. No way was I going to stay out there and form the basis of “127 Hours: The Sequel.”

Then I tried to get in the car, and I very nearly, shall we say, felt good outside of my body.

The only force that could contort me into the driver’s seat was the fear of encountering subsequent hikers at the trailhead and being coerced into their conversations. Once I Lamazed myself enough to shut the door, I felt startlingly fine. That interlude was rather like the calm between contractions. I just had to get myself home, where, if I had to die, at least no one would see me.

Again, I am not speaking hyperbolically. I did not know with any certainty that I would be able to open the car door. In fact, I knew with greater certainty that I could not. Nor could I think as far ahead as exiting the vehicle, or climbing the three steps to my front door, or turning the knob to enter my own home. Because when your back is tweaked, the small stuff will absolutely murder you.

Some people sit in their cars after arriving home to finish a gripping story on NPR. I sat there wondering how long I would survive in the heat after the car ran out of gas and could no longer run the A/C. I eventually drifted from such thoughts to some other pink-dancing-hippopotamus dissociative happy place, which is not quite like feeling good outside of my body but close enough.

Eventually, though, I took advantage of a gust of wind to open the car door. I gritted my teeth and emerged into the world much more easily than the first time, even though the first time my mother was in labor for 12 hours.

This rebirth was, once again, not hyperbolic. That very moment, I vowed that I would take better care of myself to prevent my back from ever going out again. I swore I would sit with better posture and take more standing breaks. I promised I would lead a more active lifestyle – for real this time. But first, I need somebody to let me in.