As a people, we’ve recently gone through one of the darkest periods in American history. Our national nightmare began on an otherwise perfectly typical evening in early November 2016, when the impossible happened. Ever since, the darkness has had its unabated way with us through the coldest, shortest days of winter. But now, finally and inevitably, baseball is back.

Granted, baseball will never be the same again, since the lovable, cuddlable Cubbies won actual games to become the next Evil Empire, squatting in the Yankees’ pinstriped throne. But that little detail cannot change the euphoria that accompanies baseball in the air. Fresh clay, manicured grass, oiled mitts, hot dogs wrapped in hamburgers wrapped in bacon: these are the scents of spring. In Colorado, of course, we have to imagine these smells, because spring does not happen here until autumn. But they exist somewhere, because spring training baseball is happening, and that means I can soon fulfill a long-neglected promise. 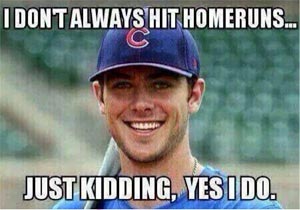 Whatever she said, the mere possibility of a willing convert has me digging into the batter’s box. And hey, if her claim is actually just a ruse to drink alcoholic beverages in front of an ESPN broadcast, then I still have the hope of a free beer in exchange for explaining ground rule doubles and intentional walks.

You may think this is a fool’s errand – after all, not even umpires understand what a balk is – but I’m a persistent evangelist. The Mormons win you over with cheerfulness; I will win her over with endurance. There’s 162 games a year, per team. That’s 2,430 games, plus playoffs. Something exciting is bound to happen at least once! And even when it doesn’t, every play offers a thrilling vocabulary lesson.

Take the intentional walk. It’s the most so-called “boring” execution of strategy in the sport. When the fielding team (comprised of “fielders”) decides it would rather put the batter (called “hey batter batter batter”) on first base than give him the chance to hit the ball (called “the ball”), the pitcher throws four unhittable pitches (also called “balls”) to the catcher, who stands far enough away to order a beverage from the vendor (called “Hey, Beer Man!”)

Nothing exciting ever happens during an intentional walk – except when it does. It turns out that professional athletes, who make hundreds of teachers’ salaries by throwing and catching baseballs at high velocity, struggle mightily to throw and catch baseballs at normal human velocities.

This strange reality results in humorous bloopers, which people enjoy watching even more than Olympic-caliber excellence. And it adds tension to the simple act of playing catch, which is perhaps the most mundane recreation involving more than one person.

I mean, seriously. I spent half an hour just last night playing catch with my dog. And my dog didn’t even know how to play catch. I taught him in no time, because catch is easy, yet mesmerizingly engrossing. I could charge people to watch my dog and me play catch, and they would pay. I could sell sponsorships. I could be a YouTube superstar. People say they watch baseball for the thrill of the home run, but let’s be honest, they watch to see men in pajamas play catch.

So imagine my disgust when I discovered that the commissioner of Major League Baseball had deconstructed the essence of America’s favorite pastime. No, he didn’t do away with the 40-hour workweek. Worse: he decreed that, starting this year, the intentional walk would require zero thrown pitches. The pitcher (who, nominally, is not a belly itcher) just says, “Yo, take your base,” and that’s that.

You can protest your congressional representatives and your fake news. Me, I’m taking a stand against the pitchless walk. If football still has to do kickoffs, and gymnasts still have to do floor routines, then you cannot tell me that the intentional walk is pointless. It has a point. Namely, the point is that baseball is FULL of ridiculously specific customs.

In a sport with so much nuance, how am I ever supposed to explain the pitchless walk to my business associate? It’s cheap and flimsy. The one facet of the game where no one has to do anything requiring any kernel of physical or strategic competence. Chewing Dubble Bubble and sunflower seeds at the same time requires more ability.

I’ll never change my stance on this corruption of the sacred rules. But I will keep on talking about it, if it gets me out of explaining the infield fly rule.