Bee-grade stash
Getting stung by the bee-keeping bug 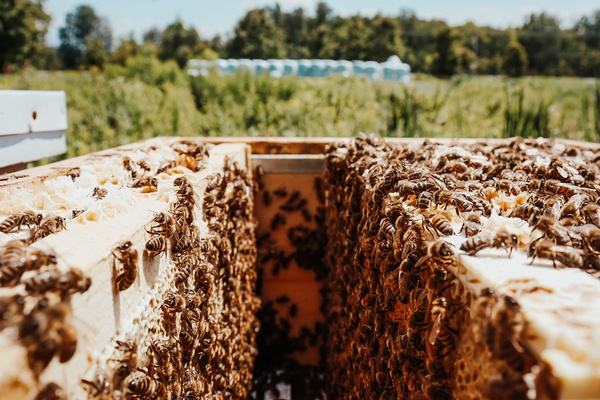 I have never shopped the black market before, but I understand the experience, now that I keep bees.

Really, there is no way to buy an animal with cash from someone’s garage – someone who just drove overnight from California with a van full of animals in cages – without feeling somewhat illicit. But I didn’t buy an animal in a cage. I bought about ten thousand of them. Times two.

You see, you can’t really breed bees on a commercial scale out here in the Mountain West. California, because of its stringent vehicle emission standards, has a milder winter, perfect for breeding queen bees because they don’t have to wear cumbersome fur stoles to keep warm at night. Come springtime, the bee dealers stuff mated queens in little personal cages, which breathe better than plastic baggies. They then stick those cages inside bigger ones, which they fill with thousands of worker bees. I imagine the dealers doing this with a scoop much like those in the bulk food section.

Then smaller-time dealers drive these cages to garages all over the nation, where they assure their users that these docile honeybees have not been laced with aggressive Africanized ones.

I have wanted to keep bees for a long, long time but lacked a stable housing situation and also one of those bee-specific hazmat suits. Last year, I took the plunge. I built two hives with my bare hands from pre-cut kits, and I drove deep into the mountains, where three times I missed the turn for this particular garage. My dealer asked if I wanted Italian or Carniolan bees, and I said one of each rather than appear like I didn’t know what he was talking about. We loaded up my two packages, which would have fit nicely inside two breadboxes if only I’d known to bring some, and I played Bach for the bees on the drive home, and somehow I didn’t die despite the one loose bee who refused to fly out the window.

On the drive, I named the Italian queen Simona, after a strong-hearted Italian woman I know. And I named the Carniolan queen Sabine, after my favorite plucky tennis player and also after a Star Wars cartoon character I don’t have a crush on because that would be weird, right?

Now I had watched a YouTube video the day before about homing a bee package in a hive. The experienced fella demonstrated it in about four minutes without a hazmat suit. So I followed his guidance to the letter, at least insofar as clothing. But when I cracked the seal on these cages, the bees billowed out like a loud genie who doesn’t care much for Bach.

I panicked. In my eagerness to Become One with the Bees, I had neglected to open the packages adjacent to the empty hives. I had to corral these genies across the yard and into some wooden boxes – with no prior experience, no help and only one EpiPen, just in case.

After some more panicking, I settled on the same tried-and-true approach I use for home and automotive repair: I ignored the problem until it went away. The bees ultimately follow their queen, and the queens were still snug in their little penthouse cages. So before dusk settled in, I suited up, gathered the tired genies, situated Simona and Sabine in their new domains, and proceeded to peek in on them every day for weeks.

In fact, I grew so comfortable with my bees – who true to the dealer’s word, were not laced with aggression – that I boasted I could work with them in the nude. I envisioned a future line of honey products under the banner of The Naked Beekeeper. However, that would have to wait, because YouTube told me to leave all the first year’s honey for the bees.

If they survive that long, that is. I tapered off my twice-daily checks just in time for Simona to die for no good reason – and her hive failed to replace her with another queen. Then in an extreme January cold spell, Sabine froze.

Beekeeping is heartbreak. It’s also addicting. So this year, I found my man’s garage on the first attempt.

He gave me all the same assurances, and I placed the queens on their predecessors’ thrones – Sabine II, and Simona la Grande. (Simona la Human had the brilliant realization that a number implied the short ascension of Simona III, whereas la Grande could live forever in legend if not in flesh.) The Naked Beekeeper is on hiatus, because Sabine II’s ladies are real assholes who force me to ground and center myself like some Zen master before prying the roof off their home. But – it’s a good year for wildflowers, the bees are alive so far, and if you want in on this action, I might know a guy.