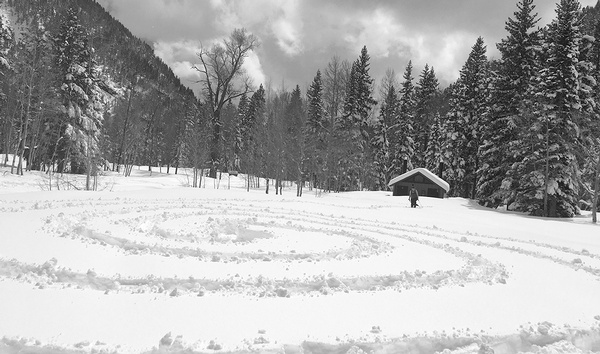 It’s been a week of new experiences.

I set up a home office for teleworking. I attended my first zoom meeting. I bought my first bottle of wine via local store app with curbside delivery, (which I promptly soaked down with a homemade solution of rubbing alcohol and water). And, I scheduled my first virtual game night/dinner party. (We’re playing Yahtzee, if you were wondering.)

It’s a brave new effing world. I’m jumping in with both feet.

Reg and I got out and snowshoed up La Plata. We spent the day making a Roo Doo Doo - a meditational path tromped into the snow. It included a huge Celtic spiral maze, and took ten minutes to transit. We were proud.

On the way out, a skier’s car got stuck and could not be moved as the automatic transmission locked into park. As it happened, her truck- a big grey Tundra, blocked the entire egress into and out of the parking lot, effectively bottling up some 12 vehicles and their owners, most of whom wanted to leave for the day.

Through dumb luck and a late start, our truck was parked ahead of the plug. We could have left, but it was important to wait and make sure the situation was resolved, for obvious reasons.

Various solutions were tried, and it was clear that the only way to get the truck out was for us to drag it bodily forward overhe slick icy road. So we moved our truck close in and got out the big yel- low tow rope.

Suddenly it was discovered that another fellow had a line on how to reset the computer that controlled the Tundra’s transmission.

The fellow was dark haired and tall. He toted a small toolbox that was obviously well kept, including a shining socket set and several important tools that one would need for, say, fixing an engine. He was in contact via cellphone with an uncle, who had the aforementioned digital solution.

In short order, the appropriate magic steps were applied to reset the tiny brain of the vehicle, which included turning it on and off in specific ways.

I found myself thinking of how Brachiosaurs also had smallish grey matter facilities relative to their gigantic Jurassic-sized body mass.

A satisfying clunk was heard.

And lo, the beast woke and lurched eagerly forward, clearing the plug. We all cheered, and I danced the Hava Nagila, not because I am Jewish but because it’s a great song.

This was a group project no one knew would be coming their way when we got up that morning and decided a short jaunt in the snowy woods was just the ticket.

But we rose to it.

Pulling, pushing, thinking, calling an uncle, and weirdly, maintaining a safe social distance through it all. And it was weird...meeting folk and not maintaining the social norms of greeting. Thinking “If I tell this per- son my name, then I have to shake hands.”

Turns out, that in actuality, no, you don’t. And it’s still just as fun to meet a new person anyway.

It’s a brave new world. Let’s sort it out, with happy hearts and the right set of properly maintained silvery tools.

Hava nagila ve-nismea Let’s re- joice and be happy