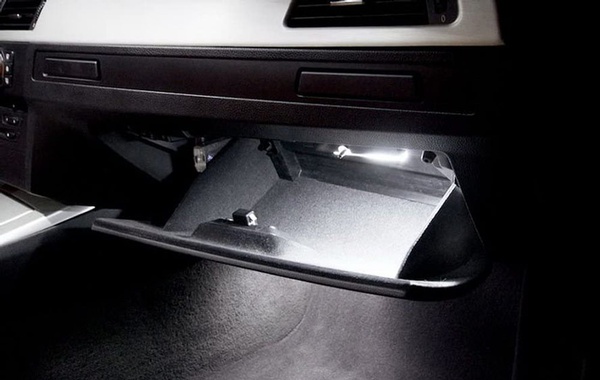 By day, this neighborhood in one of our nearby metropolisisyses is clearly on the verge of the brink of becoming revitalized. Or, at the very least, having construction finished. But by night, it skips the inevitable stage of decay and jumps straight to being a crack den for disturbed ghosts.

I parked there in the daytime, when all seemed well with the world. I returned to my car in the nighttime, and there, through the darkened windows, shone my glovebox light.

This was strange. I wasn’t even certain I HAD a glovebox, much less interior illumination for one. Which made me all the more certain I had not left it on.

I opened the door to investigate the glow and found napkins – another mystery. True, I had eaten a breakfast burrito in the car that morning, but my mess had not warranted this mess. Napkins on the seat, napkins on the floor, napkins on the console, napkins in the sun visors, napkins in the ignition. I never realized I had so many napkins. It was clearly time, my brain reasoned, to evaluate my burrito routine.

A moment later, another deduction: that same someone else had been inside my car.

Then, as if on tape delay, a third breakthrough: to get inside my car, that very same someone else must have gained entry to my car.

But how? The lock was not busted. The window was not shattered. The car had not been left unlocked – I obsess over locking the car multiple times, often to the detriment of personal relationships. By this time, all my little hairs were standing on end like little poison darts. I circled the car in the dark shadow laid down by the open and abandoned construction zone, where living and non-living car burglars alike lurked over my every move.

On my third pass, I found the shattered dream: the rear quarter window. Later, my friends would say the burglars were at least considerate enough to break the smallest window. Totally. I agree. It’s like the gentle mobsters, with names like Johnny Minnows, who make you swim with just the little fishes.

I called my best friend, who told me to quit standing outside the car like bait and to call the police. So I did. Then I waited an hour, under the eye of the future haunted mansion, when finally the cops still didn’t show.

The nice dispatch woman told me the officers were all on higher-priority calls, but they could come to my house in the middle of the night, so I didn’t have to wait, except I was driving home that night, and I didn’t figure they would want to leave the county to come take my statement for insurance purposes. And I was right, so I kept waiting right there. None of their calls were a higher priority to ME, so I called dispatch every few seconds to check on the status. Between calls, I contemplated committing insurance fraud, but I decided karmically I better keep an honest tally of what was missing: a tailored three-piece suit, custom leather shoes, an heirloom watch, a MacBook in an Osprey bag, Bluetooth speakers, wireless headphones, a month’s groceries, the only existing manuscript of the next Great American Novel, some spare golden ingots, my dogs’ collapsible car stairs and my chewing gum.

I also was developing another high-priority call after three hours waiting for the police: I had to pee. Perhaps public urination would be a higher-priority call for the PD too. But I played it straight. I called dispatch again and told them about my pressing situation.

The nice woman tried to guess which convenience stores might still be open at that hour, to which I asked what if the police finally arrived right after I left, to which she said they could call me later to take my statement over the phone, to which I made a facial expression that was most likely audible.

This story has an ending, if not strictly a happy one. An officer called 10 minutes later and demanded I email her a written statement, complete with photos, even though it was the dead of night, at that very moment. So I found a place with enough light to make out the car on my phone camera, and an hour later I was on the road in time to return home just before sunup. All my missing items put together didn’t quite match my deductible, and neither did the window replacement. But hey, at least the culprits are still free, and I feel like I gained a glovebox light.