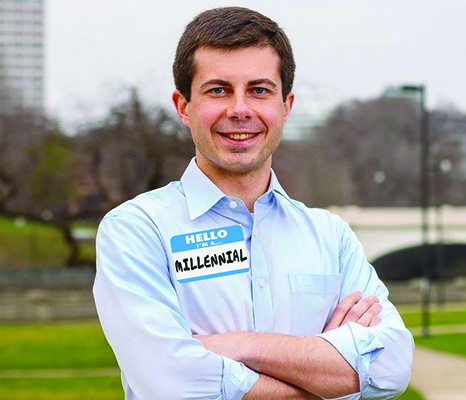 I’ve been following the 2020 presidential candidates, looking for a glimmer of hope, and then all of a sudden there it was: Pete Buttigieg. (Say it with me, “buddha-judge.”) I first saw “Mayor Pete’s” name pop up in the Wall Street Journal a couple months ago. (You know you’re no longer a dirtbag when you start reading the WSJ. Alas, I don’t actually pay to read the articles, I just scan the headlines, so maybe I have a little inner-dirtbag left in me.)

It took Mayor Pete appearing on the “Breakfast Club,” a hip-hop centric radio show out of New York City, last week for me to get to know who he was: a 37-year-old mayor and Afghanistan war veteran from South Bend, Ind., who is “blowing up” as a presidential candidate. Right after I heard him on the “Breakfast Club,” I noticed that he had seemingly been all over last week, from the “Late Show” to the “Daily Show.” And he’s climbing in the polls.

As I listened to Mayor Pete speak and tell his story of who he is and why he’s running for president, I started to get emotional. But I wasn’t sure why. I agreed with his politics, and I liked his demeanor. (He speaks intelligently, unlike the current occupant of the office.) Why would him speaking put tears in my eyes? It’s not like he’s a deep poet or something, he’s just a candidate for office.

Dissecting that moment, when I became unexpectedly emotional, I also realized that although I can be very pessimistic about the state of the world, these are problems we didn’t create, we inherited them. In the words of the homey Tupac Shakur, “I was given this world, I didn’t make it.”

Listening to Pete made me feel something I hadn’t felt in a while: that I am still young, my generation is young. I’m practically a f***ing Millennial; I never realized that. I better get on Snapchat. Wait – is that still a thing? I just figured out Instagram.

All jokes aside, I feel invigorated as our generation rises to power. Something I didn’t mention about Mayor Pete is that he’s openly gay. That would be another major milestone for our nation and would hopefully improve gay rights across the world. I hope that our generation will be the one that truly embraces equality for all people.

I’m not one to write short, but I suppose this time my message is sweet and succinct. It will be time for something new, very, very soon. And whether it’s Mayor Pete or someone else, it is time for our generation to take the lead!