Burning down the schoolhouse
Teachers need our love now, more than ever 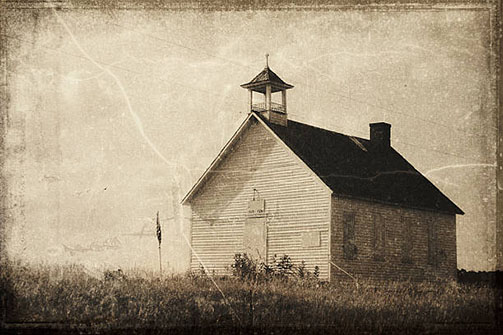 William C. Quantrill was a murderer, rebel slave hunter and outlaw of the West who died at the ripe old age of 27 from a gunshot wound. Before becoming involved with his nefarious activities, Quantrill worked as a schoolteacher, which makes me wonder if things might have turned out more favorably for him and the rest of society had people treated their schoolteachers better.

In 1853, at the age of 16, Quantrill might have briefly aspired to do something good for his community. The following year, after his abusive father died and left the family with an enormous financial debt, his mother opened their home as a boarding house. Teaching, however, was a short-lived ambition for Little Willy. He soon moved to Illinois to unload lumber from rail cars for a little more money. Sounds like a teacher, doesn’t it?

The bar was set very low to qualify as a teacher in mid-19th century rural America. Most likely, if he didn’t drink too much whiskey before stepping into the schoolhouse, he’d probably have been deemed a keeper. That, and a familiarity with the Bible, plus an ability to administer a good whipping, amounted to a full slate of prerequisites for an aspiring professional in public education.

These days, with a few exceptions, teacher certification requires at least a four-year college degree, successful completion of wide-ranging competency exams, state licensing fees, background fingerprint investigation and recertification requirements for license renewal. Plus, you need coursework in special interest areas, like a state’s history or special curriculum training, things a state legislature feels it should impose before any school board approves a contract to hire a teacher.

Maybe Quantrill should have run for a political office after quitting his teaching job, because in this country – even today – being elected requires no demonstration of any competency, not even at the local level where district school board members are chosen by community voters. These vacancies, once elected, hopefully result in board members with a working knowledge of fiscal policy and enough patience to actually listen to the professionals they hire, not to mention (but it should be mentioned again) an awareness and willingness to follow the laws that govern legitimate decision-making.

Apparently, hauling lumber was tedious, because Quantrill quickly shifted to a less regimented career: capturing runaway slaves for a bounty in place of rounding up truant children. He joined a group of like-minded outlaws and Confederate sympathizers, becoming their guerrilla leader and supervisor during the Civil War, earning his gang a reputation for being notoriously ruthless. According to the Oklahoma Historical Society, “Quantrill’s activities indicated that he fought for plunder and personal revenge rather than from any commitment to the South.”

“We love our teachers” signs have appeared like dandelions on our community lawns as heartfelt expressions of respect, but they also serve as banners of support for a profession that is currently under siege, a situation easily ignored because educators have endured as poster children for crisis. Poor wages, supply shortages, contract negotiation impasses, shoestring budgets, shabby school buildings, overcrowded classrooms, understaffed districts, disappointing scores on standards testing, dismal graduation rates, teen pregnancies, teen suicides and senseless school shootings, just to name a few. In education, the Big Lie has always been those who can, do; and those who can’t, teach. But the truth is beyond question – teachers can, and teachers do, perform miracles each and every day.

According to NPR, “Since January 2021 ... 35 states have introduced 137 bills limiting what schools can teach with regard to race, American history, politics, sexual orientation and gender identity.” It’s a new uncivil war brewing, pushed through conservative-controlled legislatures in too many of our un-united states. An Oklahoma bill would like to fine teachers $10,000 for contradicting a student’s religious beliefs (even if that belief is voiced by the student in the classroom). A bill in Arizona would like to punish teachers if they don’t inform the parents that their child is gay. In Tennessee, complaints against teachers may also be lodged by citizens who are not parents of school-age children. In New Hampshire, a conservative mom’s group is offering a $500 bounty to catch teachers who break a state law prohibiting certain teachings about racism and sexism.

Rodney Dangerfield complained he couldn’t get any respect, and Quantrill complained about the same thing. After repeatedly being sidelined by the Confederate army without what he considered a worthy promotion, then criminally charged in Texas for his murderous eccentricities, Quantrill abandoned his ambition for praise and headed back to Kentucky, but not to teaching. Instead, he organized a personal militia. As a deception, they dressed as Confederates, scheming to be pardoned after surrendering to the North but his band was intercepted by a Union unit, and in a skirmish Quantrill received a fatal wound.

News reports on school shootings describe how horrific disgruntled violence strikes at the core of our society’s hope for the future. Justifiably, many skilled teachers are packing up and heading for the exits, and these premature retirements provide yet another kind of exit wound that will surely be felt for generations to come.