Climbing over the hill 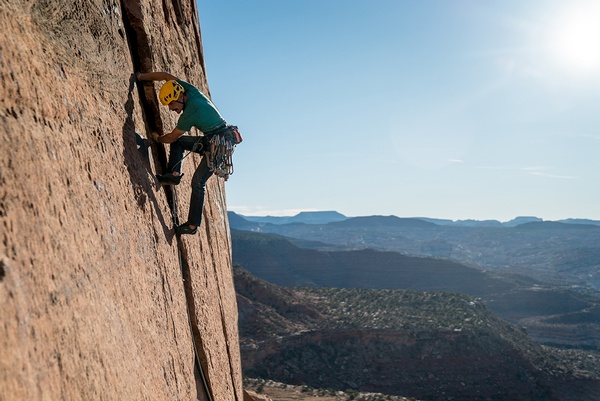 When I was a kid, the only thing I’d really heard about turning 40 was that it was called “over the hill.” I also know that it sounded old, but when you’re a kid, every age older than the age you are sounds old.

Well, I turned 40 this past weekend. And all I can say for sure is that it doesn’t sound old anymore, but it does seem like a benchmark. And, because I’m a climber, I guess I’ve climbed over that proverbial hill.

“You made it,” was something several people said to me last weekend, and that feels more appropriate than “over the hill.”

“You made it” makes more sense because the older one gets, the more he or she realizes the fragility of human existence. Not everyone makes it, and from what I can tell, there’s no rhyme or reason. I’ve had a couple near-death experiences while climbing, and I probably shouldn’t be alive today because of them. But here I am, living, writing, breathing, and looking outside, I’ve never been so happy to see a blanket of snow.

I am not a religious man, although I come from a religious family. I’m waiting until death to find out what happens. After my two near-death experiences, I realized all I wanted out of life was to live another day. I decided I would pay close attention to the risks I took and weigh whether they were worth it.

I can’t say that’s why I am alive today, but I do know that paying attention to each and every decision is important. Who you choose to surround yourself with seems important too. There are plenty of people out there who want to bring you down to their low level of living; stay away from them.

It’s a crazy time to be alive, but isn’t it always? My thirties went by faster than any other decade of my life. I also made sure my thirties were marked by goals – I probably could have done the same with my twenties, but hey, I’m a climber, and climbers should spend their twenties in the great outdoors.

I showed up to Durango in my early thirties with a dollar and a dream, and you know what? This town embraced me. I washed its dishes, mucked horseshit, sat houses, walked dogs, rolled burritos, and now, finally, I get to write stories.

I know all the dark sides of humanity are here. I can’t even begin to compile the sad stories I know of, and have heard. I have to be honest and say that I have less faith in humanity now than I did when I moved here. Part of the reason I got out of the restaurant business is the general public – it’s almost guaranteed that someone is going to be a jerk for no reason on a regular basis. Ironically, the worst encounter I had here while working in restaurants was with a local minister. That’s humanity for you.

While a lot of humans suck, and some have reasons to, there’s still millions of good ones to choose from, and you better start finding those people today if you haven’t already. If you have suspicions that someone close to you doesn’t have your best intentions in mind, you better ditch them faster than a wildfire spreads from tree to tree. We all need a family, a team, a community, a significant other. We all need a whole bunch of good people with good intentions. If you’re not busy being born, you’re busy dying. That was Dylan, of course.

That said, I don’t think I could live anywhere other than Durango. There could be a better place, but I haven’t found it, and I don’t have wanderlust. Sure, I’d like to see some more places on this dust ball, but home is where the heart is, and my heart is here.

In the last couple years, I’ve found myself dabbling in political writing. I had some things I needed to get off my chest, and I’ve received some good feedback on some of that writing. But, I’m starting to get sick of it, because I’d like my writing to reach more than just the people I share political beliefs with. I will continue to take more action on issues that I believe in, and I will put pen to paper when my heart is called, but I’m tired of writing political rants. There’s enough of that out there in this world anyway.

What I’m not tired of is the act of writing itself. I want to reach more and more people with my stories, and I’m proud to announce that my fifth book, The Desert, is now complete, and I’ll be embarking on a book tour for it next year, starting of course with a presentation at Maria’s early next year. And, this Friday I’ll be at Pine Needle during Noel Night slinging books and zines, and catching a buzz like everyone else.

Thanks for helping me reach 40 years old, Durango, I’m looking forward to writing many, many more stories for you.