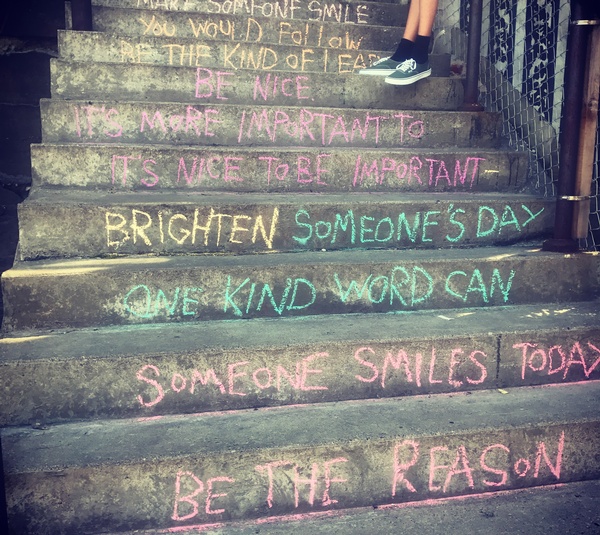 It was the stuff of parental nightmares: A robo call from the school principal using the words “school” and “shooting.”

When the call came in last Thursday morning, as I was delivering papers downtown, I wasn’t quite sure what to make of it. The principal spoke in calm tones, alerting parents to a shooting at Aztec High School but reassuring us that students at Durango High were not in danger. All the necessary steps were being taken to keep students safe. There were scant other details, and, possibly in a state of shock and denial, I went on with my business.

However, as often happens in small towns, ye olde gossip mill soon began churning. Bits and pieces – truth and falsehoods – emerged with every stop I made. One of my first stops was with a sage barber, with whom I often chat.

“Did you hear the news,” he asked as I entered.

He wrung his hands and shook his head in disgrace. “I heard they haven’t found the shooter,” he said. “And you know, Aztec, it’s not that far from here. The shooter could drive up here in no time.”

And that’s when it hit me. Nope, Aztec was not that far – figuratively or literally. If it could happen there, it could happen here. Or anywhere. In other words, we are Aztec.

It seemed surreal to consider. Saying goodbye to your child in the morning, like it was any other day, only to never see them alive again. I thought of my own son, six feet of ganglyness, topped by an unruly mop of hair, towering over the freshman class. An easy target if ever there was one. These are the morbid thoughts that course through the maternal brain.

I muttered the only thing one can think of at such a time: “Why?”

The octogenarian barber continued to shake his head. “I don’t know,” he said woefully. “Things are not how they used to be. People – people are scared. They’re living in fear.”

He was absolutely right. But fear of what? People who don’t look like them? The unknown? Their neighbors? Schoolchildren? How had we gotten here?

I stumbled down Main Avenue, where I soon ran into another familiar face. We stopped and talked – everywhere I went, people were trying to process the news.

And that was when, for the first time in a long time (anyone who knows me can attest to this), I cried. For our neighbors to the south. For those parents whose children would not be coming home. For our country, where this kind of thing seems to be the new normal. For our leaders, who have seemingly become numb.

“When did it become OK to go into a school and shoot up kids?” I demanded of another shopkeeper friend.

“It’s not OK,” he reminded me, lest I thought I was going insane.

I continued my tirade, but he only shook his head, also at a loss. Politics, government, he offered.

That was also true. As much as I probably wouldn’t care if all the guns in the world were thrown into a giant bottomless pit, I knew that would never happen.

For starters, there’s that thing called the Second Amendment, something about a right to bear arms, and the all-powerful NRA. And while I may be a bed-wetting pinko liberal, I respect that right. To protect oneself, to protect others, to hunt. Heck, I even have a few friends (females, I might add) who like to target shoot for sport. I get it. Americans like their guns.

But if gun control isn’t the answer, then what is? It’s obvious mental illness plays a role, but I would say this plague has reached epidemic proportions. If this was a virus killing innocent people (14,651 deaths to gun violence in the United States so far this year), we would throw every penny and resource we had at it. Instead, we throw up our arms in resignation.

“The price of freedom,” I’ve heard some say. A cowardly response to an even more cowardly act.

“Arm the teachers and teach them to shoot,” is another common refrain, possibly even more ridiculous. Is that what it’s come to? Teachers packing heat and kids wearing flak jackets? For starters, teachers dont make enough money to be trained sharpshooters. And besides, school is hard enough to navigate without throwing fear of death onto the heap of childhood insecurities.

“School should be a sacred place,” I argued to a sympathetic ear farther down the street, a friend, who has a grandson in high school.

She nodded but pointed out, there really is no such thing as a sacred place anymore. Movie theaters, concerts, even churches are all fair game. But what’s a parent to do?

“Just give them lots of hug,” she said, and then offered one to me.

It seemed silly, such an inconsequential answer to such a monumental problem. Like putting a band-aid on a gaping wound. This isn’t a problem we can “hug” our way out of.

Or is it? The more I thought about it, the more it made sense. After all, studies show humans respond positively to touch (“good” touch, that would be). In fact, I once read you’re supposed to hug someone twice a day. Maybe it was as simple as that – sharing the love, whether a kind word, a friendly hello or just a smile. Sure, it won’t change the world overnight. But it just might help calm some of those irrepressible dopamine urges and chip away at those barriers, real and imagined, that exist between us all.

It certainly couldn’t hurt. As I headed down the street, I encountered someone I like to think of as my nemesis, a delivery guy for the, ahem, competition. Although I had never actually spoken to him, for years we had battled over rack and parking spaces alike. There was no avoiding him, and that’s when Elsa rang in over my internal PA system: Let it go.

I struck up a conversation, delivery mano y mano. And suddenly, the evil enemy I had built up in my head dissolved. He was just a normal guy, happy to have work and get by in life. Just like the rest of us.

I guess at times like this, it’s easy to offer up cliche?s. But you know what’s even easier? Being kind – trying to understand the other side, and realizing, they’re people too. You might even discover you have something in common (ink-stained hands and a worn-out clutch, for example).

In the meantime, if I (or any other parent, for that matter) never get another robo call again, it will be too soon.