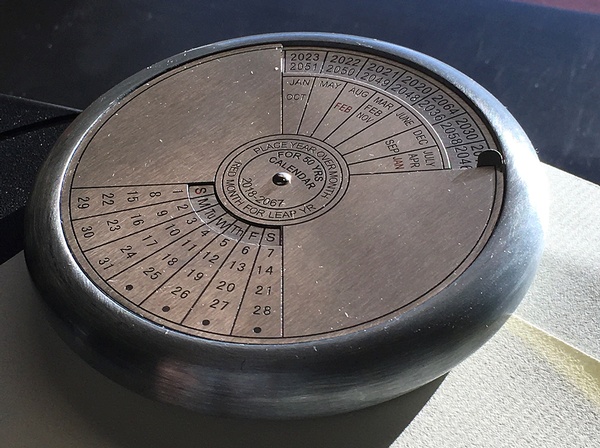 The idea of having a window into the next 50 years sounded sort of visionary. Don’t we all yearn for a closer look into the future?

I called the masked volunteer over to the display case and asked if she would show me the calendar. She scrutinized the glass shelves, then glanced up and scrutinized me.

“Actually,” I said, “it’s not a paper calendar. There, on the middle shelf, that strange stainless steel disc bearing a remarkable resemblance to the top tier of the Starship Enterprise. The little box next to it advertises it as a calendar.” I pointed at it. Her expression broadened into a smile of recognition. “I’m just curious to see if it works like a crystal ball and what it might reveal about our future.”

“Oh, I see,” she said. Now that we were on the same metaphorical highway traveling in the same direction, she lifted the object and its empty cardboard container to the counter, then stepped ever so slightly back, as if shielding herself from it, or possibly from me.

At the center of the device, within the confines of a tiny circle, gracefully etched letters and numbers displayed these words: FOR 50 YRS 2018-2067.

A rather uninspired prophecy revealed itself to me. On the last day of 2066, I’d be 113 years old. Anyone could accurately envision where I’d be spending that New Year’s Eve, which in case anyone’s wondering happens to fall on a Friday. There. Something I didn’t know. I also speculated that much of the world’s work force, released from quarantine, would be enjoying a long holiday weekend. A few more revelations and I might be regarded as a soothsayer.

I bought the calendar, if for no other reason than the prospect of simply touching the next 50 years. It would feel like owning a time machine.

Then I thought about our most famous prognosticator, Nostradoomus. Nobody could accuse him of having a cheerful disposition. His predictions read like a sustained nightmare. Take a peek into his prophecy for our 2020 political world:

“In the city of God, there will be a great thunder.
Two brothers are torn apart by Chaos, while the fortress endures.
The great leader will succumb.
The third big war will begin when the big city is burning.”

It’s more than a stretch to expect anything reassuring would come from such a disclosure, but I reasoned “the fortress endures” sounded like a shred of good news. I won’t go on to repeat his other dreadful predictions involving a plague-like epidemic, an impending financial crisis, or any number of climate-related disasters, but as I studied the Nostradamus legacy, I spotted a glimmer of hope, a poetic reason for feeling less depressed. You see, all his predictions were written in rhyming quatrains. What if I set one of my own to a hip-hop beat? Might people of the future cringe less when they speculate about their destiny?

“As the midnight hand spasms on the brink of 12 clicks
in a distant decade of twenty-sixty-six,
a young accountant will suddenly remember it’s time to update his great-grandpa’s calendar.”

Readers may have difficulty hearing the music, but the rhythm soothes. While it is encouraging to know I’ll never need to buy another calendar to keep track of my days, it’s also irresistible, with so many future months held open, to get hung up on what might happen instead of focusing on what is happening? I don’t expect to live forever, but how counterproductive that Nostradamus never appeared to have a good night’s sleep. Just look what he left for us: a divination of doom nearly 500 years after his death to infect our expectations. For that, he should be dubbed “the coronavirus of prophets.”

By way of full disclosure, my new calendar is not a crystal ball. It’s just an object, about 3 inches in diameter and a half inch thick. My days have never fit so neatly into the palm of my hand. The brushed stainless steel surface gleams on my desktop each morning when sunlight filters through the window, so I pretend the instrument is occasionally solar powered, though it contains no electronics. Just manually rotate the top disc with my finger and align the current month with its corresponding year. It’s a delicate operation, one that can inadvertently add 20 years if I bump the device while getting my desktop organized, or if I’m lucky, nudge it in the other direction so it makes me a little younger. That’s the thing about the future, it’s touchy.

I can’t scribble on it or hang it from a wall, but weighing in at 5.5 ounces it works as predictably as a small rock by preventing my papers from flying around the room if I open the window. That’s the kind of prophecy I can use.