Derby is my jam

Last weekend, I attended a Durango Roller Girls roller derby. My friend – let’s call him “Tim” because that is his name – and I had very different experiences. For my own part, I have to say that it was a relief to watch a sport where I as an audience member don’t objectify the participants. Unlike, say, football.

I’ve really gotten turned off of football, and it’s not because of the NFL’s unwillingness to tackle the long-term effects of head injuries, or the slogging minutes of nothing happening between spurts of commercials. No, what gets my goat is that Americans tune in to football so they can ogle the glorified male physiques on display while ignoring the athleticism, dedication and detection-evading performance enhancing drugs that these athletes bring to every game.

We reduce these individuals to their position on the field, their artificially enhanced shoulders and quads, and a last name on their jerseys. We forget that these men have college degrees and childhood traumas, mistresses and drug addictions all their own. They are not mere slabs of meat with regional logos on their heads.

Derby girls, on the other hand, are impossible for me to reduce to their physical bodies. That’s not to say these women don’t have phenomenal physiques. They’re athletes, after all, and Tim defaulted to viewing them just like football players. Perhaps I too could appreciate their sculpted frames if I weren’t so invested in the nuances of skating, strategy, and whatever the hell else is going on out there during the game-jam-competition thingy. 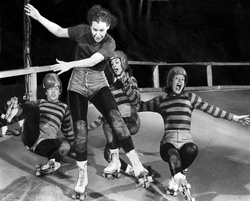 Tim wanted to know how I enjoy this sport without reducing the participants to pinups, and here’s how I explained it: these derby girls are whole human beings with the full spectrum of their selves on display, augmented only with pragmatic sporting equipment like fishnets and tattoos and thigh-high socks. Oh, and roller skates. Speaking for myself here, I cannot focus on superficial aspects when there’s so much more to these women.

Also, unlike those objectionally objectifiable professional footballers, these women are everyday people like me and, presumably, you. They are bankers, therapists, EMTs, administrative assistants and marijuana retailers. Like I said, just everyday folk, with everyday names like Eager Beaver and Mutha Stucka and Quadess of Pain and Illegal Peaches.

But – and I cannot stress this enough – that’s the end of where these women are like the rest of us. Put wheels on their feet, and they turn into superhumans. Also unlike the rest of us, you can tell just by observing that these ladies are truly wellrounded people.

Throughout the night, Tim and I discussed just how well developed they are as individuals. Certainly they discuss philosophy, recite poetry and repair automobiles. Without a doubt, they’re philanthropists; they probably gave money to Irma relief before Harvey was even finished. We wondered what they’re like in bedlam – they are undoubtedly level-headed under duress. And we concluded they must be really good at giving heads-up notices to their business associates when derby schedules conflict with work commitments.

But that was just two men getting carried away, daydreaming about the fullness of these women’s personalities. For this hour and a half, none of those qualities matter to the derby girls. All that counts is the competition. They channel all their passions quite fiercely into it.

And for all the other diverse and well-developed qualities these roller girls bring to the rink, it’s their badassery at roller derbying that is most obviously and undeniably blatant. It ill behooves me to ignore this facet of their stunning characters. To truly appreciate these women and their accomplishments, we made certain to appreciate the skills they were practicing right before our very eyes.

I don’t wish to single out any one player, so I won’t identify whose skills Tim and I studied in greatest depth throughout the match-bout-contest whatsit. One might think one would overlook this player because her name doesn’t rhyme with one of the more popularly censored phrases in our vernacular. But during any particular scrumtangle-block-event, she uses her skills so deftly – so gracefully, in fact – that one could only acknowledge that

“oh, THOSE are her peaches.”

And that’s why... wait, what was I driving toward?

Oh yeah. A conclusion. To be honest, I expected to reach an understanding of our deeper humanity by this point in the column. Something that connected my roller derby experience with an intrinsic truth about decency and respect. But such growth was not for me; I entered the rink already able to value human beings for who they are, without resorting to judgment on superficial levels.

But I was fortunate to be able to aid Tim in expanding his myopic focus and appreciating our Durango Derby Girls as profoundly talented human beings. Next season, we will be rinkside for every home bout-joust-round, in hopes that one of them will flash us her real name and invite us out for an intellectual conversation.