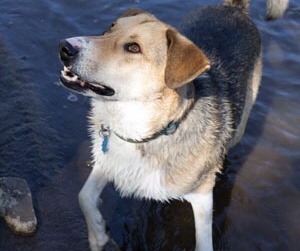 You might think I’d be happy that my dog finished his course of chemotherapy. For the record, I’m not saying I’m NOT happy. I’m saying only that Wally’s last day of treatment triggered a wide variety of emotion-like symptoms and side effects that the veterinary literature did not disclose to me beforehand.

Why am I experiencing all of these emotions that aren’t pure joy and elation? I mean, my dog just graduated from a six-month treatment protocol, which means he no longer receives intensive doses of drugs with names like Rheumasmallpoxyanide and Cyanenemanimosity, and also my monthly expenses are about to re-enter normal atmospheric conditions. By all societal standards, I should be elated.

But here’s the conclusion I came to: no matter how much I say I’m living in the moment with Wally and appreciating every day we get together, I am still intensely disinterested in him dying.

Again, I feel I ought to be tickled 18 shades of rosy pink. Chemotherapy’s job was to treat Wally’s lymphoma. Now that he’s done with it, his chances are now much higher of living a) longer, b) happier, and c) at all.

But here’s the other conclusion I came to: doing chemo meant I was actively doing something to keep Wally afloat. And not doing chemo anymore? Well, that’s a whole lot of not doing anything but waiting to see if the cancer comes back – or not.

Besides, all the language in the veterinary literature discusses doggie survival rates in terms of months after chemo. Key word: AFTER. It’s like I hit the big snooze button on my dog’s lymphoma for the summer and fall, and now that winter’s here, the clock is moving again.

I thought that reaching the end of chemo would be a triumph. Instead, it’s a finish line that runs me off a cliff. I have no ground under my feet. And I have no idea how far down the bottom is – if there’s even a bottom at all. If I’m very fortunate, all my mixed metaphors will cushion the blow down there.

A brilliant idea! And one I could totally do, if I had any idea how to go about conducting a ritual.

The shape of the ritual itself, I’m led to understand, is not important. But when I consulted more authoritative sources, like Buffy the Vampire Slayer, it was clear that a botched ritual results in all sorts of unhinged demons and other high-school drama. So I built a ritual that was free of mythological invocations, blood and any possibility of screwing it up. Seriously, it was on the sticks-and-stones level of technological innovation.

However, I’m not so sure I should spill the secrets of what my ritual entailed, exactly. A ritual is a highly private affair, not exactly meant to be shared with just anyone who can read. Plus, including a bullet-list ritual recipe is a cheap way to flesh out a column, and I have enough words left in me to finish this out, thank you very much.

On the day we ritualed away my anxieties, I packed up my rucksack with enough supplies to draw suspicion at the border. We went to a sacred stretch of riverbank, a place where we could be alone with the water and enjoy seclusion, far from prying eyes, which was handy because the ritual involved uncontained fire.

We scrambled down the rocks to the low-water shoreline, and – egads! A fly fisherman was already there. I whistled to make it look like I had no ulterior motives. La la la, nothing to see here. Just a boy and his dog, and a rucksack full of Wiccan contraband.

This was no good. I couldn’t have this rugged man observe my ritual and call the cops because some alleged delinquent was dancing around with his shirt off and yelling guttural sounds on public lands. Plus, he might think I was weird.

So we picked our way down the rocky shore, aiming for a turn in the river that would shield us from the fly fisherman’s view. We rounded the bend and – there was another fisherman!

I was willing to go to great lengths to remain inconspicuous to these sportsmen. Wally, I should note, was meanwhile busy doing his thing, which consists of drawing attention to himself. He ran around all hyper, greeting the fishermen, sniffing their tackle boxes, and generally making it clear that I was the human responsible for his behavior.

I finally lured Wally away from the interlopers-in-waders to a secluded stretch of river rock. We were as far away from the second fisherman as we were from the family of three picnicking around the next bend upstream. Less than ideal. But I was ready to get a move on with this letting-go ritual thing.

So while Wally splashed in the water and hunted for fetching sticks, I arranged my elemental tools and lit them on fire until the wind blew them into the water, and then Wally tried to sniff the flames still on shore, and then I dunked the objects in water that weren’t already there, and by that point all I had left was a rock, which I offered to the sun in gratitude.

And when it was done, this dog baited me with his eyes – the same eyes that told me he wasn’t done living yet, that chemo was the right choice in the first place – right into chasing him through the woods and over boulders and through a picnic under fishing lines. We crumpled into a soggy, sandy heap. And then we went and ate barbecue.

The whole thing was absolutely ridiculous. But I’m glad we did it, even if there’s still nothing I can do for Wally now but wait and see.