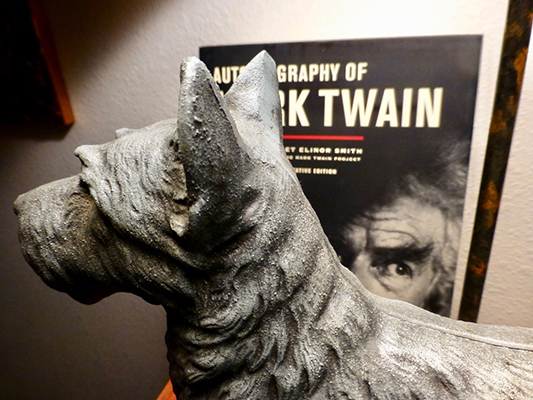 “Heaven goes by favor; if it went by merit, you would stay out and your dog would go in.” – Mark Twain

Someone must hold a record for receiving the most misattributions, for being credited with saying what he or she never even thought, especially if the sentiment is funny and has something to do with a dog. A good example: “Outside of a dog, a book is man’s best friend; inside of a dog it’s too dark to read.” It sounds like Twain, but it isn’t. And it may not be Groucho Marx, the man often cited as its originator. One-liners tend to float about, untethered to their sources, which is why I bought a thrift store copy of Twain’s autobiography. I would study
the life of a noted funny man.

Holding the book, I noticed how the bottom corner of its cover had been chewed off, as if someone’s taste in literature ran too close to literal, leaving a ragged piece of grey cardboard flapping like a dog’s ear. I looked carefully for dental impressions and concluded it was either an unsupervised puppy or an illiterate infant. I can forgive the dog, but what kind of parents permit a child to teethe on Twain?

After many false starts at launching his autobiography, Twain relied on his dog brain for finding a workable strategy to complete it. First, he disrupted the accepted notion that our lives leap forward in neatly arranged chronological chapters. Then he got his paws on a new-fangled dictation machine (which didn’t work all that well) before he finally hired a real-life stenographer, sat back against his pillows, and dictated whatever life events surfaced in his mind, in whatever sequence his brain opted to remember them.

Dogs live by similar rules – by impulse. Chewing on one bone, the animal then catches the scent of a distraction, leaps up and goes off in another direction without a moment’s contemplation.

I bought the book, despite the slightly defaced cover, thinking I could simply avoid holding the spot once smothered by slobber, dribble or drool. Only a few of its pages were dog-eared. Otherwise, Twain’s life story appeared virtually unread. Upon closer examination, I had to laugh at his cover photo, taken near the end of his life, revealing a dour expression with both eyes cast downward – in this case by pure coincidence – toward this book’s damaged corner, as if from the grave he could still convey his displeasure. “It takes me a long time to lose my temper,” said Twain, “but once lost I could not find it with a dog.”

Mark Twain is as American as the Fourth of July, yet he despised that holiday and called it “Hell-fire Day.” A majority of dogs would agree. Too many pooches spend the entire day in some dark corner where they cower, hiding from all the commotion. If you check public bulletin boards and telephone poles around town the day after, you will notice how many “lost dog” notices appear, some offering rewards for the return of their beloved pets that have been frightened off at the ferocity of our independence. According to Twain, “Eight grown Americans out of 10 dread the coming of the Fourth, with its pandemonium and its perils, and they rejoice when it is gone – if still alive.” It’s all too plausible that a dog survey would register the same opinion.

At this point I should admit to never having raised a dog, save one puppy I picked up and shamelessly exploited to attract women while studying in college. My strategy involved attaching an extremely long lead to his collar and letting the puppy’s curiosity take him out to the sidewalk where female students from the house next door passed by. I remained seated on the shady porch, slowly reeling the puppy in, letting him loose again, back and forth, a sordid fishing escapade. All afternoon, only one woman followed the dog all the way to the porch. She fixed me with a glare that could have peeled paint.

“Hand me that leash.”
I did. She turned and took the puppy for a proper walk. When she returned, placing the leash in my hand, she told me of a family she’d met that could properly care for a puppy and oversee its maturity toward dog-hood. Before the end of the week, I gave the puppy away.

Ann Landers supposedly wrote a piece of advice she might as well have written to me: “Don’t accept your dog’s admiration as conclusive evidence that you are wonderful.” I must shamefully confess I’m not even half finished with volume one of the Twain autobiography. A Twain scholar might be more impressed with the writing than I am. But the smartest thing I ever did after gifting my puppy to a loving household was to turn back toward the woman who accompanied me there and follow her home.