Down the rabbit troll

I lied in my last La Vida. I’m still mad.

I wrote that last piece after a desert retreat, and damn, even in the days of Trumpism, the desert is still able to work its magic. My anger subsided for a brief time. However, that wore off. And President Pussy Grabber is still the leader of the free world.

So what to do? Well, for starters, and I’m not proud to admit it, I’m handling my anger in a similar fashion to Trump. I’m trolling people on social media.

I know this looks bad. Let me explain.

I get angry about Trump and Trumpism at least once a day. It’s probably because I’m a news fiend. I check the news all the time. The New York Times is my staple, but I also go to CNN, and even Fox just to see how “the dark side” is reporting things. If Fox News isn’t amateur reporting, I don’t know what is. No wonder they are Trump’s preferred news source. To be fair, CNN creates a whole lot of amateur news content as well. 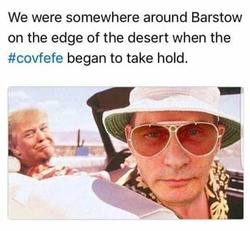 Funny thing about Fox News is, the man who is president of 21st Century Fox, Lachlan Murdoch, son of Rupert Murdoch, actually reads my writing. Lachlan is a climber and reads my publication, The Climbing Zine. Hashtag humble brag. I haven’t exactly figured out how to coax him to cancel Fox News, but baby steps, right? At least they got rid of Bill O’Reilly.

It’s a frustrating thing to be angry about something you really can’t do much about. And it’s not just like I’m mad because there’s a Republican president. I don’t even consider myself a liberal. I feel like I’m a moderate. There’s too much of this “I’m a conservative,” “I’m a liberal” business in our country. I just consider myself an American, and I consider Trump to be un-American.

So as much as I hate Trump, I can’t really do anything about him being president. I can’t even get him to respond to me on Twitter. I’m just not famous enough. So now I’ve got my eyes on his supporters. And who is the most well-known local politician that vocally supported Trump? J. Paul Brown, who served two terms in the Colorado House of Representatives but was defeated by Barbara McLachlan last November.

At this point looking down the Twitter Rabbithole, I’m seeing myself writing these words, and my higher consciousness is saying, “man you’re starting to look a whole lot like Trump here ... trolling politicians who lost the election ... what the hell?!”

Normally I’d listen to that voice, but Trump is the president of The United States. That still seems weird to write. You know what would sound much better? Trump is in federal prison. Doesn’t that have a nice ring to it?

So I don’t listen to that voice of reason, and I’m trolling, baby! (Insert George Costanza voice). A few weeks ago, J. Paul and I became “friends” on Facebook. And it didn’t take long for Brown to post a meme that I found incredibly well, stupid. It was a picture of a guy wearing a cowboy hat in the sun, and the words read, “When, exactly in earth’s history, did the climate not change?”

That. That right there is why I’m so angry. That meme is Trumpism. Trumpism is populist American politics with passion but not intelligence. What that meme is doing is taking a fact and misconstruing it so ignorantly to create a desired reality. What we really need right now is intelligence in our politics, especially with issues like climate change.

I doubt readers of the Telegraph need this bit of information, but it’s worth repeating: scientists almost universally agree that the release of human-caused carbon dioxide into the atmosphere is causing the earth’s temperature to rise. A somewhat lesser known tidbit is that during the 2008 presidential race, John McCain and Barack Obama weren’t debating whether climate change was real –they were debating who was going to do the most about it! (McCain’s ads from the 2008 campaign are still online if you need further proof.)

So being a troll-in-training, I commented on Brown’s post, questioning why, as a former public official, he would blatantly post something that is simply false. He didn’t reply. I created another post, and tagged him in it, reaching out to my base to see what intelligent friends I have that might be considering a run for office in 2018. Then, I reflected. Was I resorting to Trumpism? Why was I giving attention to this person, who already got voted out of his job?

Climate change is just one of many important and urgent issues our country faces. When Trump pulled the United States out of the Paris Climate Agreement earlier this month, he made it clear that he won’t address this problem. He won’t address the cyber attacks that Russia made on our election either. He will be a failure as a president; I feel like that’s pretty obvious.

American politics swing in a pendulum. Eight years of an intelligent, progressive, African American president swung back in an extreme way to this short-sighted, xenophobic, masochistic, racist, ignorant troll. You know what, though? This is still a democracy. We can (and will) vote Trump out and elect a new wave of leaders. Trump isn’t Putin or Jong Un, his reign will be short.

So publicly I’m going to announce that I’ll try to do better to not succumb to Trumpism. Maybe instead of trolling J. Paul, I’ll interview someone who’s actually in office, like Barbara McLachlan, who defeated him and now serves our district in the Colorado House of Representatives. Maybe instead of posting about climate change on Facebook, I’ll do some research to see how I can reduce my own carbon footprint and advocate cleaner technologies. And maybe, just maybe, I’ll motivate some intelligent people to run for office in 2018.

Luke Mehall is the author of four books including American Climber.