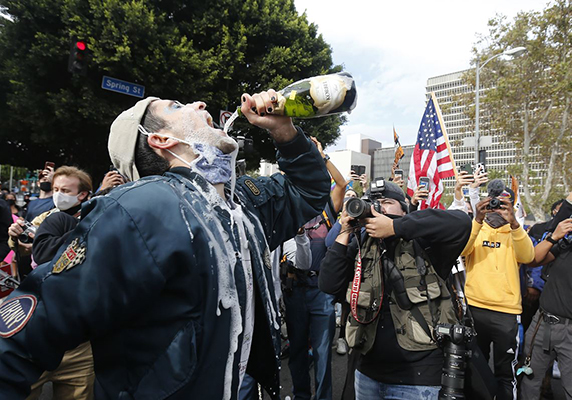 All year long there’s been a theme of when I sit down to write this column, there are certain happenings that I simply have to write about. And, this is one of those times after Joe Biden and Kamala Harris’ historic victory. But first, I have a correction to make on my last piece.

In that piece, “E-bikes and Elections” I was reflecting on an experience of mine when I got passed by an e-bike on our local Twin Buttes trail system, and I also mentioned a similar encounter that my fiancée Amber had. Except I mistakenly wrote that Amber had also been passed going uphill by an e-bike, when in fact, she threw the hammer down and the e-bike couldn’t catch her.

And why wasn’t I able to fact check this with the person I live with? Well, perhaps it’s because, as a local nurse, she’s been busy with the rise in COVID, and all the stress that comes along with it for our medical professionals.

The lesson here: Amber is a way stronger biker than I’ll ever be, and I should have known a mere e-bike couldn’t climb faster than she does on a mountain bike (no motor needed). Plus this also gives me an opportunity to plug that the City of Durango is still accepting feedback on the use of e-bikes on our local trail system, and you can email rec@durangogov.org with your thoughts.

Additionally, while the national media seems to have moved on from the story that our medical professionals are American heroes as they fight against COVID, I would like to thank them here for all their work.

I guess I have another correction, because in my last “La Vida,” I noted that we were going to be in Bears Ears National Monument on Election Day. Again, because of Amber’s fatigue from working, we decided to stay here that night and watch the results roll in like the rest of the world.

I was stressed, and watched until 2 in the morning while we learned that the winner of the presidential race would not be declared that night. And, of course, we didn’t find out until that Saturday.

Indeed, I was traveling back home from Bears Ears when I got the news over the radio that Biden had been declared the winner. After two days of binging on the election results, I went out to climb for a day in Indian Creek, on what would be my last day of climbing for the fall season. My climbing partner left that evening, while I stayed out with my dog, Hope, and “enjoyed” a dust storm that night as my tent got blow down and we decided to sleep in the back of the 4 Runner.

Hope was the only one I had to celebrate with when I heard the official declaration that morning. I whooped in joy, and Hope just looked at me like “what’s the big deal?”

It felt like a relief more than anything. Joe Biden was not my ideal choice for president, but he represents something in a president that we’ve missed in this Trump era: basic humanity and integrity. That night, more than any night in this COVID era of separation and anxiety, I wanted to be with people. I wanted to cheers beers, cry a tear or two, hug people and celebrate the very historic evening.

Instead, I sat on my couch and vicariously celebrated with the people dancing in the streets in cities across our nation. My buddy Dave, who is in my “germ circle,” came over and we gave a toast to this grim era of the United States coming to close.

While Trump’s presidency will be over soon, the man is still president, and while writing this I don’t feel a celebratory spirit any more. While the COVID cases rise dramatically, the lame duck president plays golf and spends his energy fighting against American democracy.

Even though I am no longer in a celebratory mood, my vision for the future is clear. During these last four years, I was paying closer attention to politics than I ever have before. The issue of Bears Ears National Monument has become an obsession. This land continually saves my soul, and it was an outrage that Trump had tried to rescind the protections. Hopefully the Biden administration will be able to restore the monument in full and the importance of the Antiquities Act can fully be realized.

Through following politics so closely, and becoming engaged, I feel like I learned a very important lesson: it is essential to be informed and to participate in the process. As a writer, I’ve learned it is imperative that I scream the message that I believe is the moral right from the mountaintops.

As we move into a new era, our country is still as divided as ever. Those divisions are complex, and some might never go away, at least not in our lifetime. But you know what matters the most right now, and what America values more than anything? Winning.

Boebert appears to be a Trump disciple: she’s echoing his claims of election fraud, while also claiming that the election she won by only 27,000 votes here in Colorado was perfectly fair. She’s embraced the Qanon conspiracy theory, which was born on the dangerous 4chan website, and has tweeted about Tom Hanks being involved in a Democratic led pedophile ring. I mean seriously, who pushes conspiracy theories about Tom Hanks? The guy is an American treasure.

And then there’s Hickenlooper. I’ve been critiquing his leadership style for years, because, well, he’s a blatant hypocrite. On the campaign trail he touted that he was for the climate economy, but his record as Governor shows that he allowed oil and gas to go unregulated. He also constantly downplayed environmental catastrophes like the Gold King Mine spill, like when he famously drank water out of the Animas to “prove” it was safe. He also claimed the air quality in Durango was perfectly fine during the 416 Fire, when it was at a very hazardous level. However, Hickenlooper did flip a much-needed Senate seat by beating Cory Gardner, and someday I’d like to have a craft beer with him, thanking him for that!

Now, it is our duty to hold our politicians accountable and to get more wins in the realm of social justice, climate change, the environment, health care and an economy that works for more Americans. The future of the planet hangs in the balance.

Luke Mehall is the publisher of The Climbing Zine and host of the Dirtbag State of Mind podcast. More of his work can be found at climbingzine.com.

Why writing for money never pays

Consider LPEA broadband petition
Having a ball
Lack of humor damaging to all
School funds, OHVs & foster care
Support for media literacy bill
The binoculars of history
Read All in Soap Box